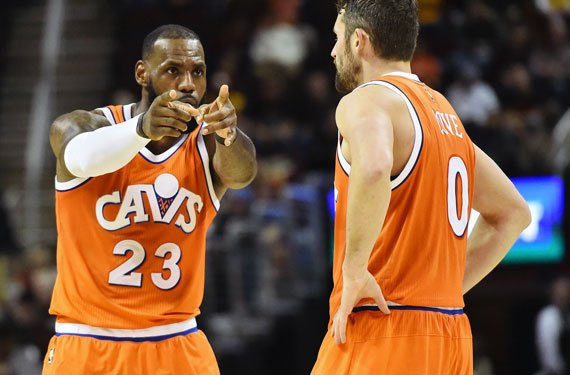 Cleveland– The Cavaliers topped the Philadelphia 76ers 122-105 on Friday night and avoided falling into a four game skid.

LeBron James led all scorers with 34 points and also grabbed nine boards. Kyrie Irving had 24 points and nine assists, while Kevin Love had a double-double with 18-points and 10 rebounds.  J.R. Smith and Channing Frye rounded out the Cavs players in double figures with 14 and 12, respectively.

As the Cavs began pulling away in the second quarter and slammed the door shut in the third, it was clear the offense was clicking better than it had been as of late. So will the Cavs leave this horrendous month of March behind in which they went 7-10? All signs point to yes according to head coach Tyronn Lue and James.

Lue and James both alluded to the fact that the Cavs issues stemmed from them gelling on the court mainly due to injuries that left Kevin Love and J.R. Smith out of the line-up for so long.

“When our big three are playing well together, we’re tough to beat,” Lue said. “So Kevin, Kyrie and LeBron tonight, those three together were finally getting into a groove and a rhythm, which they hadn’t been in awhile since Kevin was out for so long.”

“On the court chemistry took a hit. Our camaraderie didn’t, but at the end of the day, we have to fix it, and we’re here to fix it,” James said.

LeBron James talking about the Cavs camaraderie when asked if it's taken a hit @NEOSportsInside pic.twitter.com/m0yC7Pk98S

But with Love’s double-double tonight, and Smith going 4-for-7 from three-point land, many fans are hoping that this game will mark the turnaround for the Cavs as they head into the last few weeks of the regular season.

Injuries aside, what’s clear is the Cavs still need to improve on the defensive end of the floor. Philadelphia is not even close to being full-strength, and they still shot 49 percent from the field, going 40-of-82.

And one final observation, for what it’s worth: maybe orange really is the new black in Cleveland. The Cavs are 5-1 this season when they wear their orange throwback jerseys and have won by double digits in each win: