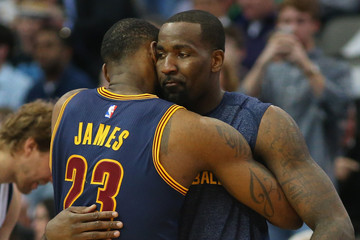 CLEVELAND– The Cavaliers have waived Kendrick Perkins, according to a release from the team.

The news was first reported by ESPN’s Adrian Wojnarowski. With the move, the Cavs will hit their 15-man roster limit for the regular season.

Perkins played for the Cavs during the 2014-15 season. He received a training camp invite from the team this year after not playing in the NBA last season. Over his 13-year career, Perkins has averaged 5.4 points and 5.8 boards a game.

If no other NBA team signs him, there is a possibility of him joining the Cavs’ coaching staff, as first reported by cleveland.com on Friday.

“We’ve already talked about that,” Lue said after the Cavs’ final preseason game, per cleveland.com. “I think Perk was great because he holds everybody accountable. He plays the right way, tries to do the right thing every single day.”

“You need a guy like that around. A guy who’s going to be the right person for the team, not worrying about himself, not being caught up in all his own personal things and will help the team out in any way he can.”

In the same release, the Cavs also announced that they waived Isaac Hamilton. Hamilton was signed on Oct. 11 and did not appear in any preseason games.