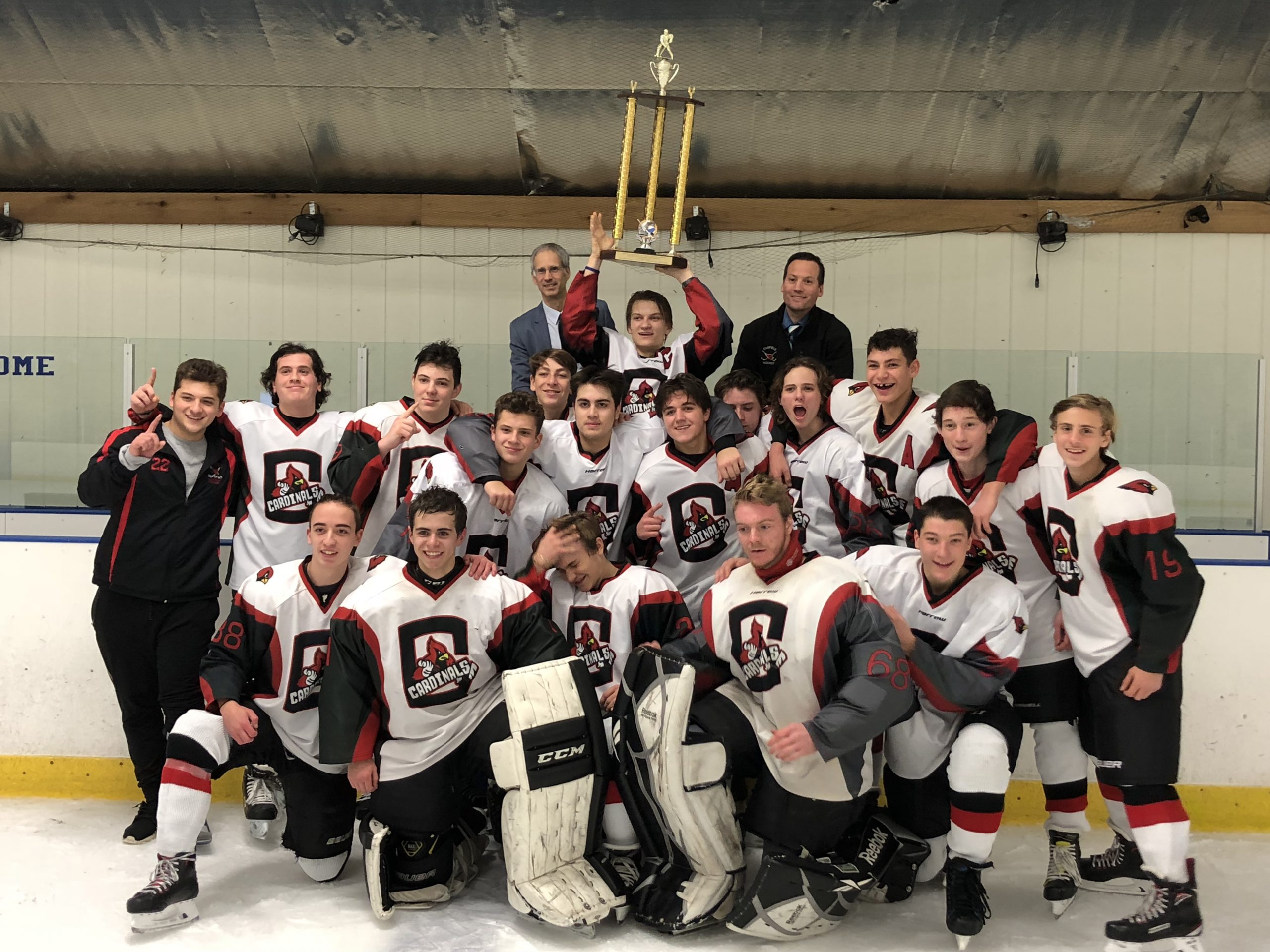 PARMA, OHIO – Winning a tournament is always a good way for a program to start off their season, and for the Canfield Cardinals, they were impressive all weekend long, winning the Bruce Anderson Normandy Holiday Hockey Tournament with a Monday night 7-4 vicotry over the Orange Lions.

The Cardinals, who were 9-8 last season in the White South Division of the GCHSHL, outshot the Lions on the night 45-16, and also got impressive play from goalie Ben Janik in the win.

The junior goal keeper pushed away 12-of-16 Orange shots on the night, allowing his mates on offense to build a lead and hang on for the championship win.

Cardinals sophomore Brian Woak, who scored four goals in the title win, was named the MVP of the weekend tournament which kicked off Friday morning.

The first win for the Cardinals was a 4-2 decision over North Olmsted on Friday, and then they topped CVCA on Saturday, and defeated NDCL Sunday to earn the trip to Monday’s title game.

Canfield led the game 2-1 after one, and outscored Orange 3-1 in the second period, as they put 22 shots on goal, peppering Lions sophomore goalie Danny Moore, who was named the ‘Outstanding Goalie’ for the tournament.

After Orange scored the opening goal as senior Justin Beachler found the back of the net with 7:19 to play in the opening period, the Cardinals then scored two goals to take a one goal lead after the first 15 minutes.

Woak scored his first of his four goals with 6:49 to play in the first, and then Sophomore Eli Dredge lit the lamp to give the Cardinals a lead they wouldn’t lose.

The Lions kept clawing though, and closed it to a 4-2 game as Beachler scored his second goal of the affair, getting a shot past Janik with 3:08 to play to make it a two-goal game.

Woak again though quickly put the Cardinals back up by three, as he scored his third goal of the game 15 seconds after Beachler’s second goal, pushing the lead back to 5-2 after two periods.

The two teams each scored twice in the third, with again Woak setting the pace with his fourth goal, this one with 13:16 to play to make it a 6-2 Canfield lead.

Orange closed it to 6-3 on a goal from senior Matt McCusky with 6:31 left in the game.

The final Canfield goal was recorded by senior Stone Elias, who ended any doubt with exactly four minutes left to make it 7-3.

The final goal of the night went to Beachler, as his hat trick goal for the Lions closed out the scoring with 3:29 to play making it a 7-4 final.

The game did have its share of infractions, as Canfield was assessed 16 penalty minutes, the same amount put up by the Lions.

Canfield will be back in action on Friday at the Ice Zone as they play host to Western Reserve Academy. The Lions will at The Pond on Saturday at 4:20pm to take on Chagrin Falls.

Last season it was the North Olmsted Eagles winning the holiday tournament, as they topped Chagrin Falls in the Championship game in Parma.

Click the Pages for Pictures of the championship game between Canfield and Orange!

Berea-Midpark High School Boys Varsity Swimming falls to Olmsted Falls High School 106-72
PODCAST: Listen as SOT recaps games from the HSF State Semifinals and give you the State Championship matchups for this week!