Buckeyes take down Minnesota, improve to 9-0 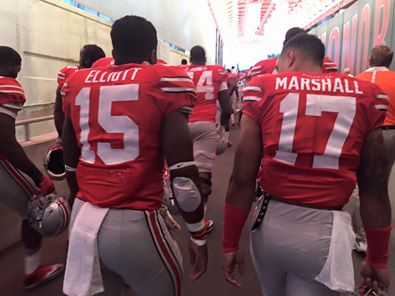 Ohio State overcame another slow start before riding a strong defensive effort to a 28-14 victory over Minnesota on Saturday night.

Ezekiel Elliott rushed for 114 yards and a touchdown, securing his place in Ohio State history.  He has now passed Beanie Wells and is the 4th leading rusher in school history.

“He’s an animal, I love that kid,” said Head Coach Urban Meyer, who flashed a little smile when told of Elliott’s new ranking.  “He’s a team player.  You can see how he was holding onto the ball because they were trying to strip it there at the end.  He’s a work horse and we’re very glad he’s going to be with us for a while.”

Zeke rushed for 100+ yards for the 14th straight game, dating back to November of last season.

Ohio State began the game slowly, as Cardale Jones struggled to find any offense.  Midway through the second quarter, neither team had scored, and Jones had completed only four passes while taking three sacks.  Safety Vonn Bell broke the scoreless tie by snagging an errant pass and returning it 16 yards for the pick-six.

The Buckeyes followed that score with a 7-play, 77-yard drive for a score, capped by Elliott’s 15-yard dash for pay dirt.

Jones found senior WR Michael Thomas in the corner of the end zone in the third quarter to open up a 21-0 lead.  Minnesota made it interesting late, but Jones sealed the game with a 38-yard TD run with under two minutes left.

Following the game, Jones snapped at a question about his efforts towards keeping the starters role, stating that he “only wants to do whatever it takes to win”.

Ohio State travels to Illinois next weekend for a Noon kickoff.