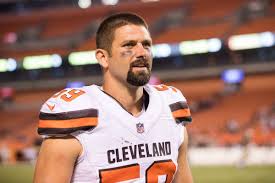 Carder is heading into his seventh NFL season, spending his first six seasons with Cleveland. However, he lost his 2017 season due to a season-ending ACL injury.

The former TCU Horned Frog has appeared in 78 games for the Browns, starting only two games coming in 2013 and 2014. He was in line to start at middle linebacker last season before suffering a torn ACL during the pre-season.