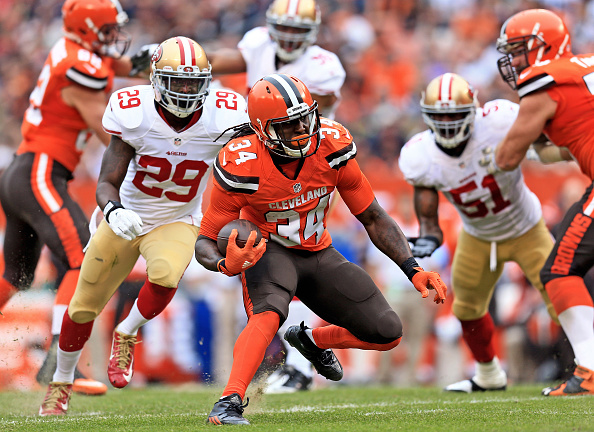 Browns running Back Isaiah Crowell is ready to have a monster year for the Browns with a new offensive line and a team that is ready to put the 1-15 nightmare of 2016 behind them.

Crowell was one of the bright spots in a dark season a year ago, rushing for 952 yards with seven scores, and catching another 319 yards worth through the air.

It wasn’t that long ago (about two weeks actually) that Crowell said something that Cleveland sports fans have heard plenty of times over the years – “this is where I want to be.”

Yet to date he hasn’t inked a new deal and with his deal set to expire after the final Browns play in 2017, there’s plenty of speculation about his future with the franchise.

Saturday he spoke about agent Drew Rosenhaus, who has been handling all the chats with the Browns at this point, and where things seem to stand with the situation.

“I just feel like God controls everything so I am just trying to just be patient,” Crowell said.

“I know my time is coming. I am just being patient, stay working and keep working hard and just trying to be the best I can be.”

Atlanta Falcons running back Devonta Freeman just inked a new five year deal with Atlanta worth a reported $41.25 million over five years, which, in addition to the $1.8 million he was scheduled to make this season, would be a total of six more years and $43 million.

That equals out to an average of $8.6 million per season, Crowell will make $2.746 million this season after inking his one-year tender.

So how does Crowell look at the Freeman deal?

“Yeah, you go and think about it,” Crowell said.

“It is just obvious to think about, but I feel like it is great for him. I feel like he is a great player. He deserves it.”

Crowell is hoping the Browns will feel the same way, keeping him in brown and orange for a long time to come.

Video: CBS’ Adam Schein: Will the Browns Be Exciting to Watch in 2017?
Kizer Splitting First Team Reps With Oswieler