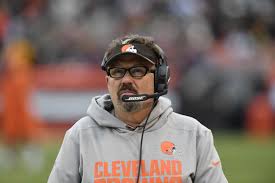 This comes after the team fired Hue Jackson earlier today.

Williams will be taking over amidst a three game losing streak by the Browns.

It was reported earlier that Senior offensive assistant Al Saunders was taking over for Jackson, but now it’s Williams’ show to run.

House Cleaning in Berea, First Hue Jackson and Now Browns OC Todd Haley Fired
Looking ahead to next season: Three potential candidates to be the Browns next head coach