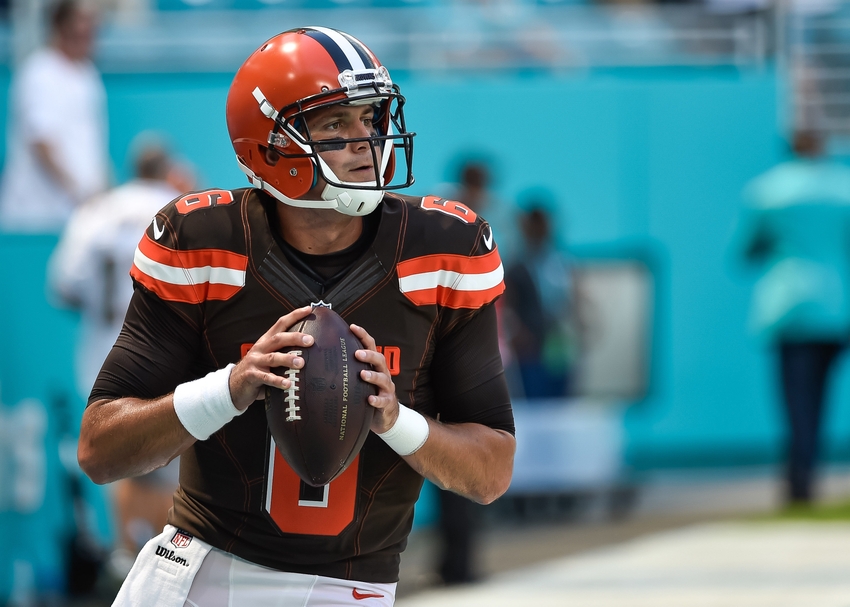 In an overtime thriller down in Miami, The Cleveland Browns scored 11 straight point in the forth quarter but couldn’t seal the win in OT against the Miami Dolphins.

The game started off with a positive when former Dolphin CB Jamar Taylor picked off Ryan Tannehill to give the Browns rookie Cody Kessler great field position. Kesslers first drive as a starter was a delay of game, fumble but recovered, hand off to RB Isaiah Crowell and then sacked and fumbled. Tannehill then drove the field with help from his running backs and heaved a 26-yard touchdown to DeVante Parker and led 7-0

On the Browns second drive, we had a glimpse of WR Terrelle Pryor under center for the first time in two years. He first caught a pass from Kessler, then ran a read option play and ran for a first down. After a completion to TE Gary Barnidge, he overthrew a pass and caught a break as a for sure interception was dropped.

Pryor stayed in at QB for a few more plays on the Browns next drive but couldn’t provide any positive yards against this underrated Dolphins defense. Kessler was roughed up at the beginning of the game but came back in to get Pryor, the teams best option at receiver, back to catching the ball. Kessler did get the team down for a 46-yard FG and the Browns were finally on the board but trailed 7-3.

In the middle of the second quarter, Tannehill threw his second interception for a pick six which Briean Boddy-Calhoun from 26-yards out and gave the Browns their first lead of the game 10-7. The Dolphins did get inside the red zone but due to a false start penalty and pretty good defense by the Browns, they were held to a field goal to tie the Browns 10-10. Kessler had his chance to run a two minute drill and for the most part did decent enough to get to the 20-yard line but couldn’t find the endzone but lead at the half 13-10 after a 48-yard FG by Cody Parkey.

The Browns started off with a solid drive and it looks like Kessler was becoming more comfortable with the offense and the offensive line started to give him more time to throw. He found Barnidge for a nice gain and RB Duke Johnson running and cutting in his homecoming. Miscues have cost the Browns so far this season but it was know this shuffled offense would make mistakes. False starts and defensive holding were called more times than head coach Hue Jackson would like.

The Dolphins needed a big drive to get back into this game and they did that when Tannehill threw a 42-yard touchdown to Jarvis Landry for his first touchdown of the season and take back the lead 17-13. After the touchdown, the momentum was on the Dolphins side now. The defense wouldn’t let the Browns gain any yards on the next possession and forced the offense to punt.

Tannehill did not let up on the Browns as he flew down the field yet again with ease as the secondary could not make a play against the Dolphins receiving core. Once again, Tannehill led the team down into the red zone virtually untouched and threw for yet another touchdown on this young defense. Now with the score 24-13, it seemed as the game was all but lost for the Browns at this point. Just when you thought the Browns were done, the Kessler/Pryor combo strikes again. Kessler drives the offense down to the 15-yard line but is taken out for blood on his elbow and Pryor runs in for the touchdown and convert a two point conversion to Barnidge.

The rest of the fourth quarter was tense and all defense. Both teams were not moving on offense and it was a waiting game to see who would capitalize. The Browns had the ball with 1:56 left in the game and the Dolphins needed a big defensive play and the Browns need to just get into field goal range for Parkey who has been inconsistent all game but tied the game with a 42-yard kick. After a strip sack on Tannehill, Parkey missed a go ahead field goal and his third of the game and it goes to overtime.

After questionable play calling from both teams and both having a possession in overtime, the next score would win the game. The Dolphins ended up around midfield which is more than favorable field position and Landry drove down to the red zone where the Dolphins would run in the ball for the score and make this game final being 30-24