Browns jerseys will get a much needed makeover in 2020 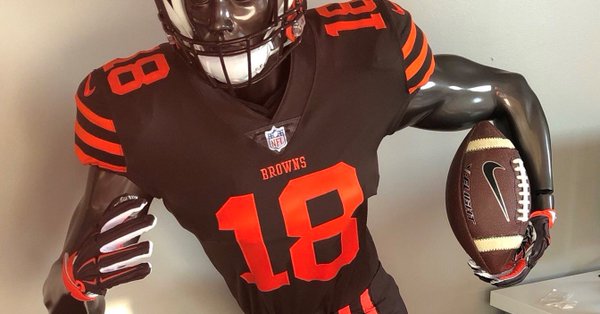 When the Browns unveiled their current jerseys before the 2015 season, they were presented as a fresh look to usher in a new era of Cleveland Browns football. Instead, that new era was a more of the same for Cleveland: a losing one, featuring all of four wins in the first three seasons with the new unis and a rock-bottom 0-16 season in 2017.

On top of all the losing, the jerseys didn’t hit with fans as well as owners Dee and Jimmy Haslam had hoped. In fact outside of the slick looking Brown-on-Brown with solid orange lettering color rush uniforms, this set of jerseys have been regarded as some of, if not, the ugliest in the NFL.

Cleveland will look to put that forgettable look behind them in 2020. Jimmy and Dee Haslam confirmed at the annual owner’s meeting in Arizona this week that the team will unveil new uniforms around this time next year. The new look will promote a “nothing fancy” mantra Browns fans have seemed to be longing for since these latest jerseys flopped.

In some ways, the current jerseys were a commendable effort by ownership to try something new and refreshing from the older look of the team that harkened fans back to the good ole days of Browns football. The “Cleveland” across the chest of the jersey was a first of its kind feature for an NFL jersey and paid homage to this football crazed city. The orange of the color scheme was made more vibrant.

Ultimately, Nikes first attempt at modernizing the jerseys for one of Pro Football’s historic franchises missed – badly. But as the team prepares for a season with its highest expectations in decades the looming uni reveal is coming at the perfect time.

John Dorsey’s rebuild has turned the Browns roster into a juggernaut, Super Bowl contender. A new look to accompany what could become the most memorable era of Browns football is appropriate.

That isn’t to say the franchise should get in the habit of constantly changing jerseys every three-to-four year, or use it as marketing ploy when the team falls on hard times. But – on top of being hideous – the current jerseys will always trigger memories of losing, bad coaching and a carousel of failed quarterbacks.

At the same time, just like it took those downtrodden years of football to get the Browns roster to where it is in 2019, perhaps it took a few years in grim uniforms for Browns fans to realize what they want in the team’s swag. A simpler, cleaner, more blue collar look is perfect. Thankfully something like that is coming, just in time for a new era of Browns football.

The Browns are in the Sweet 16 of Fox Sports NFL’s Best Fan Base Tournament
LISTEN: The Dawg Pod Episode 26