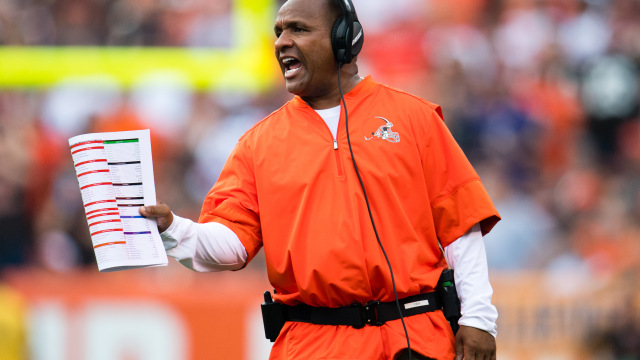 With all that is going on in the crazy sports world here in Northeast Ohio, the Cavs and Indians have been holding the headlines for weeks. Coach Hue Jackson of the Cleveland Browns had this to say in today’s press conference and NEOSI was there to share to bring the most up-to-date information available.

Head Coach Hue Jackson:
On WR Corey Coleman, who left practice early today:
“He will be fine. He came down, I think, on the ball a little bit, too, but I think he will be OK.”

On DL Myles Garrett, who did not practice today:
“He will be fine. Obviously, I am just going to be very cautions with guys. You guys know how I have been anytime guys have a little soreness that way. I want to make sure we are totally healthy. When we had the rookie minicamp, there was a little soreness. I just wanted to make sure that was out before we stuck him out there again.”

On WR Kenny Britt’s and DB Jabrill Peppers’ status:
“I don’t think it is anything major. I think all of those guys will be hopefully out performing next week and competing. Those guys have been in some practices. We just had some slips, bumps and bruises here and there. We will be OK.”

On QB Brock Osweiler on the field:
“He is doing some good things. They all are, even the young guy (QB DeShone Kizer). They are all growing and learning, and our defense is throwing a lot at them. That is fun. That is the good part. Things will start to slow down for them all and start to really understand the system and start to move forward.”

On specifically what Osweiler has shown in the past two days of OTAs:
“I think it is just two days. You guys know me pretty well – I am not going to build anybody up in two days. We are going to let these guys keep completing, playing and working. That is what they are doing every day. We just have to continue getting better.”

On if Osweiler has asked him about his role with the organization:
“Yeah, I told him what his role was. His role is to come here every day, compete, get better, learn our system, fit into our culture and try to make it better than what it has been. That is what he has done each and every day.”

On Osweiler’s career being ‘stop and start’ and difficulty being comfortable in a role after experiencing that:
“I think it is tough. I do. Any player likes to know exactly where they are going to be, what is expected and what they are going to do. We try to make all of our guys as comfortable as we can, but we all know this profession, this business is tough. He gets it. I think all of our guys do, and they just have to continue to work and accept that.”

On Osweiler and his personality, given reports from Houston that there was friction between Osweiler and members of the organization:
“I can’t speak to anything that has gone on in Houston. I just know that here he has been great. He has been outstanding here. He has done everything that we have asked him to do.”

On if Osweiler’s learning curve this time of year is different as a sixth-year player than younger QBs and if he should stand out because of it:
“Yeah, he should because he probably has experienced it more and been through it a few more times than those guys have. That is expected. At the same time, you can’t look at that and say ‘wow,’ just because he has been doing it, he should not be seen as a guy who can’t compete for the job. He has every opportunity like anybody else. That stance for me hasn’t changed, and these guys have to keep working at it.”

On noticing differences in QB Cody Kessler’s mechanics after the first two days of OTAs:
“Yeah, I think Cody is stronger and the ball has more zip on it. He has worked extremely hard. What he is working at now is maintaining it and being able to do it week in and week out and day in and day out. That is his challenge, and we will keep staying after it with him.”

On if Kizer will continue to receive more and more time with him on the field, given his comments Monday:
“I will continue to do so. I have to find out probably more about him than I do any of the guys. He is not going to get too far away from me, I know that. He has done a good job. He just has to keep getting better. He has improved from day to day. Hopefully, the guy is going to have a little downtime. The quarterbacks understand there is still so much more work they have to do away from here to play this position at a high level. That is the challenge for all of our guys.”

On Kizer’s quality completion on a deep out and then later throwing an interception on a slant and that simply being a part of the process:
“Yes, it is. If we think the young guy is are going to come out here and be perfect… He is going to every now and then throw [an interception] until he learns. He is just learning our system. As soon as I told him what the mistake was, he goes, ‘Got it.’ Now, he is like that. He does pick things up pretty quickly. Hopefully, we can improve from there.”

On RB Isaiah Crowell’s status, given he was at practice today after missing portions of the offseason program:
“He is with me. He is not going anywhere.”

On Kizer’s completion on the deep out:
“He can throw it. I think we all know that. He can really throw the football. He has to learn how to play the game the way we want it played in our system. He is growing every day, but a lot of our guys are. Hopefully, you can see that there is better quarterback play throughout practice. That is what we have to do. We have to keep getting better. That is one of my charges and (quarterbacks) Coach (David) Lee’s. We have to get this position better.”

On how well Kizer is picking up the system:
“Good. Good. There is a lot thrown at him now, but he is doing a good job. He has been better than some guys I have been around – in two days of competing against our defense and all of the different things our defense does, which is only going to make our guys better, with all of the things we get to see every day.”

On Pro Football Hall of Fame OL Anthony Muñoz attending practice by his invitation or by offensive line coach Bob Wylie:
“A little bit of both. Obviously, I have a relationship with Anthony. Bob Wylie does, too. Anytime we can get guys who have played football at a high level to come in and help with our players, I am all for that.”

On if Muñoz is in for this week or an extended period of time:
“For a couple of days.”

On the excitement of learning Pro Football Hall of Fame DL Bruce Smith is personally interested in Garrett and his development:
“It is a really good situation for us. Obviously, I know Bruce myself. I was on a team when Bruce was there. Bruce is a straight shooter and one of the best players to have ever played the game at his position. When you have a mentor like that, it is sensational. Hopefully, Myles will take advantage of that.”

On if the Browns know when Smith may visit the team:
“No, I don’t have an exact date