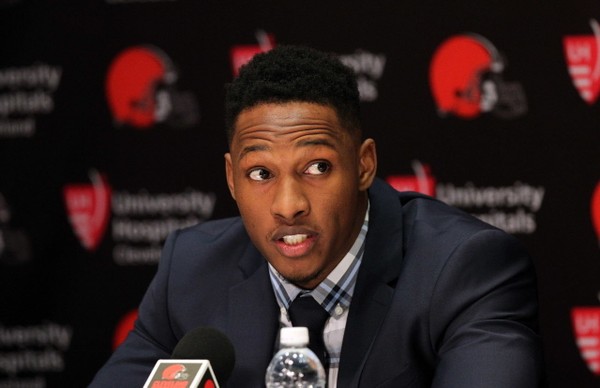 With training camp closing in the Browns are also thinking not only about 2019 but the future, and reports from Cleveland.com says the team has had some early chats with cornerback Damarious Randall.

The Browns picked up Randall‘s fifth-year option after trading for him last year, a steal of a deal from the Green Bay Packers for quarterback DeShone Kizer and a swap of both fourth and fifth-round draft picks.

Randall became a fan favorite right away with the Browns, and last season in 15 games he put up 85 tackles, four interceptions, a fumble recovery and nine passes defended.

“I would want to finish my career here in Cleveland,” Randall said.

“I love it here. The fans, the coaches, everybody in charge here, I just love Cleveland.”

If the sides can’t come to a deal, the Browns could place the franchise tag on him in order to prevent him from leaving after 2019. Right now Randall would earn $12.735 million in 2020, probably too much for the Browns to want to spend but it is an option.

The 26-year-old, who played his collegiate football at Arizona State, was originally selected by the Green Bay Packers in the first round (30th pick overall) of the 2015 NFL Draft.

Browns Unhappy RB Duke Johnson Jr. Hires Drew Rosenhaus as His New Agent
The Browns Can Afford to Have a Staring Contest with Duke Johnson