1:03 — Should have went with white socks! Oh wait they did

1:06 — the Browns secondary is playing too soft on that third down play. Jets first and 10; 22-yard pickup

1:13 — Jim Dray should have had that catch. hits him right in the hands

1:13 — McCown takes another big hit, but gets the first down on the 10-yard scramble

1:20 — McCown with a great throw to G. Barnage. Then Draughn gains a few. Browns in striking distance

1:25 — McCown runs into the endzone, then fumbles… touchback Jets. McCown cannot dive head first like that! He needs to try to avoid the big hit. Nice effort, but dumb play

1:37 — Jets stuffed! Browns come out with Manziel at QB

1:41 — Duke Johnson Jr. up the middle for 6; then loses one on the next play; McCown officially out with a concussion

1:43 — Manziel with a great scramble- brought back by a chop block

1:53 — Browns D getting great penetration, rushing Fitzpatrick; next play Fitz gets rid of ball quick for a 1st and 10

1:56 — Ivory TD called back on holding by Marshall

2:02 — Manziel runs to the sideline and gets a few yards. Smart play while avoiding contact

2:06 — Browns to punt because of a stupid holding call

2:13 — Jets’ Cromartie doubtful to return, with a knee injury

2:14 — Hartline makes an amazing catch from his back! Jets to challenge that it was a catch, but replay clearly shows it was…

2:44 — First half notes: McCown had a death wish going into this season,  but at least Manziel looks like an NFL quarterback. The Browns defense is not getting the penetration it needs to make Fitzpatrick hurry his throws. Browns have a great punter, MVP…MVP…

2:48 — Hawkins makes a nice grab on low pass from Manziel

2:50 — Hartline with the great third down grab. Shades of Brian Brennan?

2:56 — Marshall bobbles ball on out route, but no challenge. Might bite Browns in the ass…

3:06 — Crowell up the middle is not working today

3:13 — Ivory looks like a world beater today. Not good for the Browns D-line. His backup is looking strong too

3:19 — RANDOM THOUGHT: The Browns pants are too long. They remind me of those full-pant CooperAlls some kids wore in hockey in the early-mid 80s. Get them hemmed below the knee already! 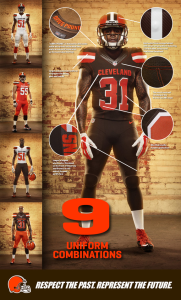 3:26 — Marcus Williams just knocked the snot out of Hawkins

3:28 — Mack with a hold, that brings back another big play by Johnny’s legs

3:29 — Manziel fumbles, Revis picks it up and almost takes it to the house. Flag, but still Jets ball

3:42 — Uptempo Browns offense will put up stats in garbage time

3:42 — Manziel saw TV stat about McCown being Browns leading rusher, so he makes a big scramble and slides

3:43 — Maziel fumbles and loses football again to the Jets D

3:52 — Johnny, despite the three or four mistakes, looks like he can lead the Browns this year. To where? Sadly, I don’t know.

3:55 — Hit Gabriel in the hands, started to turn up-field too early

Final thoughts: Johnny Manziel looked a hell of a lot better than I thought he would, but he still made too many mistakes for a NFL quarterback. The offensive line did not look like it was full of Pro-Bowlers. The defense looked like a kitchen strainer, especially the D-line up the middle, which was supposed to be a strong point, as well as Haden on Marshall. Haden looked like petite Randy Moss trying to cover him. One extremely bright spot was veteran punter Andy Lee. He pinned the Jets deep in their own territory all day long. Again – I hate to say it – Lee was today’s Browns MVP.

Browns Announce Inactives for Week One Vs. Jets
Video: Browns QB Josh McCown Knocked Out of Game Vs. Jets