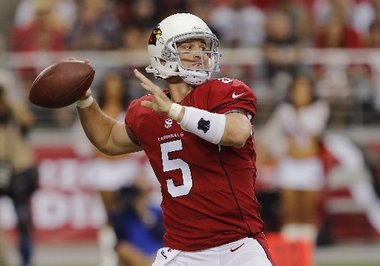 The Cleveland Browns and former Arizona Cardinals quarterback Drew Stanton agreed to a two-year deal on Sunday, NFL Network’s Ian Rapoport reported. Stanton started the last five games of the 2017 season for Arizona when Carson Palmer went down with a season-ending injury.

The #Browns and QB Drew Stanton have agreed to terms on a 2-year deal, per agent @MikeMcCartney7.

Stanton hasn’t been in a starting role for most of his career but when he has he’s produced. The former Arizona quarterback is 11-6 as a starter in the NFL. His stat line shows 4,509 passing yards, 20 touchdowns, and 24 interceptions.

The move of signing Stanton ensures the Browns’ plan of making sure the rookie quarterback they draft doesn’t play in the 2018 season.