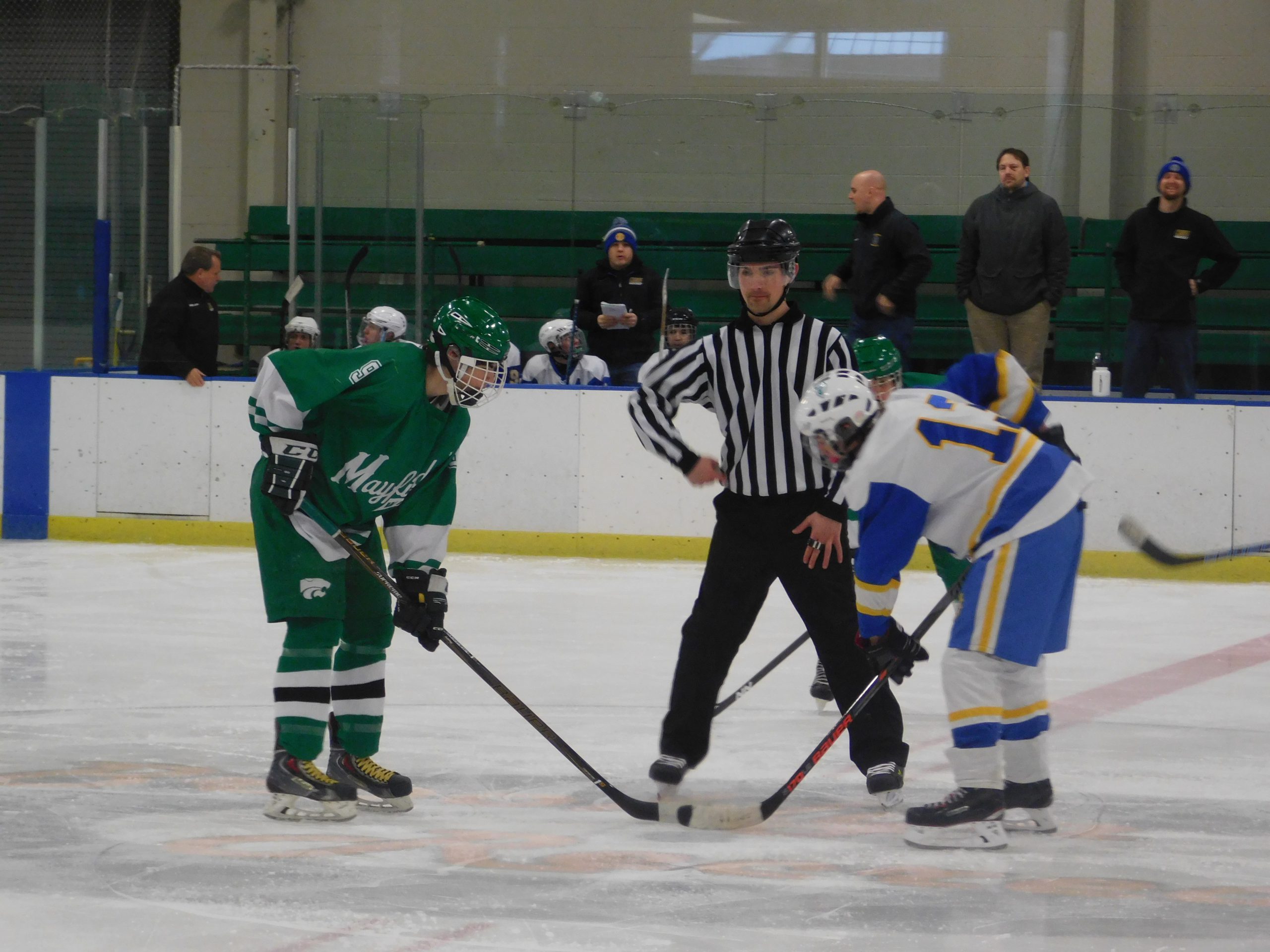 BROOKLYN, OHIO – The Brooklyn Hurricanes used a second period flurry, scoring four times as they improved to 9-1 on the season with a solid 8-2 win Wednesday afternoon over the Mayfield Wildcats.

The Hurricanes were led on the offense by center Aidan Supek, who had a hat trick in the win to go along with two assists, both in the third when Brooklyn put the game completely out of reach.

Mayfield had the lead at one point in the first period after a five-minute major penalty was called on the Hurricanes, and the Wildcats scored twice on the power play to take a 2-1 lead.

The lead was short lived however, as Brooklyn scored a short-handed goal as Aidan Supek got his first goal of the day to tie the game at two after one.

From there it was all Hurricanes, outscoring the Wildcats 6-0 in the final 30 minutes of play to skate to their ninth win of the season, dropping Mayfield to 3-7.

The Hurricanes got on the board first, as defensemen Matt Crossman slipped one in to give Brooklyn a 1-0 lead with 10:08 to play in the first.

A major boarding penalty on the Hurricanes changed the tone of the period, and Mayfield took advantage of it, scoring two goals on the power play before the period ended.

The first came with 3:06 to play, as right wing Harvey Powers lit the lamp to tie the game at one, with the assists going to Hunter Jeppe and Danny Popov.

The second goal to give them the lead came just 17 seconds later, with Kaden Jeppe scoring the goal and Power collecting the assist.

Brooklyn though rallied back and tied the game with 2:24 to play in the first on a short-handed goal, as center Aidan Supek scored an unassisted goal with 1:04 still to go on the boarding major.

The Hurricanes took control in the second, outscoring the Wildcats 4-0 to take a 6-2 lead after two periods of play.

Their first goal came with 12:31 to play as Supek scored his second goal of the game, another unassisted goal to make it 3-2.

After a Brooklyn penalty they collected their second short-handed goal of the game, with Chad Schnear scoring the goal with an assist from Gavin Supek to give the Hurricanes a 4-2 lead with 9:53 to play in the period.

They pushed it to 5-2 as Supek got the hat trick just over a minute later with 8:42 to play, with the assist going to Crossman, and then Brooklyn made it a four-goal game at the 6:20 mark as Crossman again assisted on a goal, this time again to Schnear to make it 6-2 after two.

The Hurricanes ended the second period leading in shots on goal 27-13.

Brooklyn rounded out the scoring in the third period with two more goals to wrap up the 8-2 victory. The first goal came just 1:49 into the period and went to defensemen Aaron Wrost, with Aiden Supek collecting the assist.

The final goal of the afternoon was credited to right winger Regina Wrost, with Aiden Supek getting another assist as well as Crossman with 12:48 to play, giving Crossman his third assist to go along with his goal to start the game.

The Hurricanes ended the afternoon outshooting Mayfield 37 to 16 in the win.

Click the Pages Below to See More Pictures From the Game between Mayfield and Brooklyn!

Video: Tim Alcorn of WEOL and Shaun Bennett of the Chronicle-Telegram On the Latest in High School Wrestling
Zone Stifles Bearcats as Buchtel Tops Bedford 66-44 in Christmas Classic in Garfield