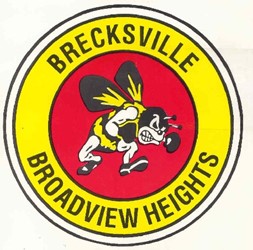 PARMA, Ohio- Normandy High School’s Bruce Anderson Memorial Tournament kicked off at the Michael A. Ries rink on Friday with first-round action between the Avon Eagles and Brecksville-Broadview Heights Bees. Avon tried to establish their culture with their new faces, as they lost prominent faces from their previous squad the year before. Without Zach Zwierecki, the main question is who would find the back of the net for Avon?

One question the Eagles wouldn’t have to answer, at least not Friday morning, was goaltending. Fresh off of a Baron Cup II Championship appearance as well as a Quarterfinals berth in the OHSAA District Playoffs, Senior Danny Fielding was ready to take this team to new heights. He started that goal in the right direction against the Bees.

Fielding was able to stop 23 shots at his net, only succumbing to a Nathan Beaver goal late into the second period. Beaver was able to dribble the puck past Fielding on an offspeed shot for the goal. Unfortunately for Fielding, there would be no scoring on from his side to help him avoid taking the defeat.

Brecksville-Broadview Heights will be a team that is trying to build to something great come the end of the 2017-18 season. They are a younger team and showed spurts of their inexperience at times while also finding their moments. The Bees coms into the season with seven of their fifteen players being underclassmen, including their starting goaltender Justin Blauman.

After their victory, one thing’s for certain: Blauman was a bright spot in this early season meeting.

Blauman was able to make 31 saves in the game and capitalized off of an Avon offense that is still trying to find out their identity. Though only tested a few times due to his stout back line, the Freshman made the tough saves when he needed to. If the Bees can count on him throughout their campaign, life will be much easier for their offense.

Head Coach Tony O’Neil expounded on that thought more after the game.

“A big shutout like that against a good team. Justin played awesome today, he really stood on his head. As far as positioning, our team is big on ‘just doing your job’. Everyone has a position that they have an assignment for and if everyone does their job, we should have no problem hanging with whoever we play against.”

Brecksville Broadview-Heights takes on the winner of the quarterfinal match between Chagrin Falls and Twinsburg.