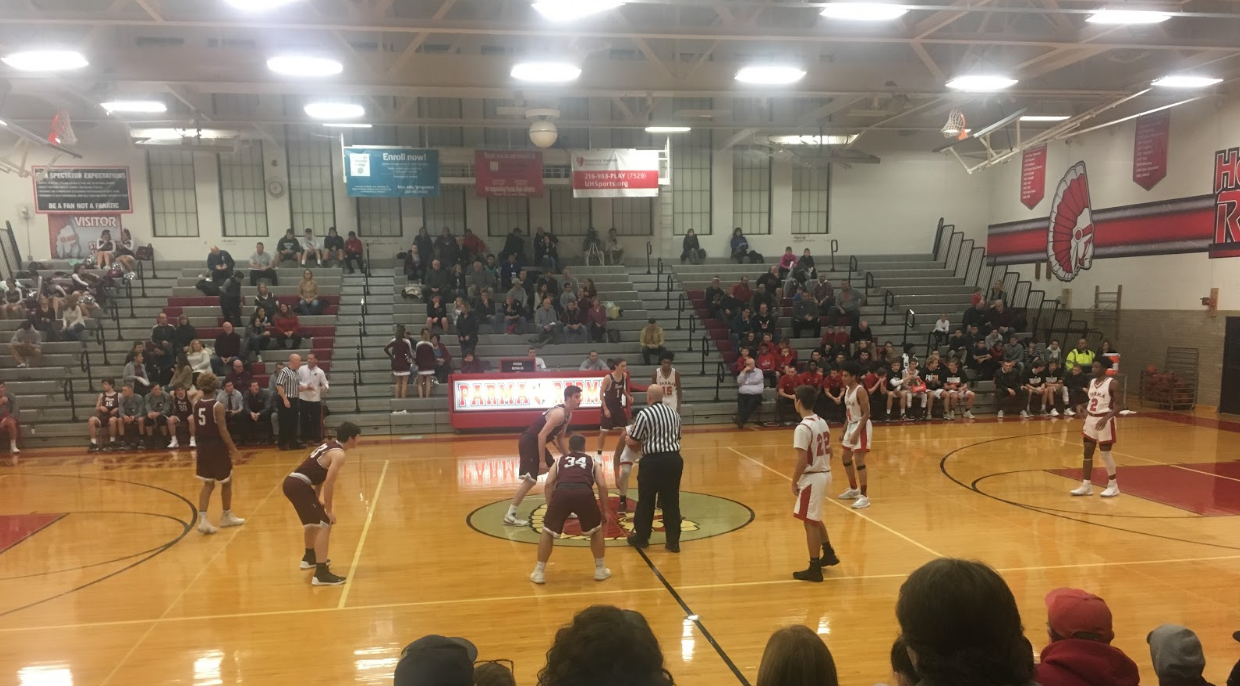 Ultimately, youth won out as it was Parma that came away with the 55-43 win.

Parma’s freshman guard-duo, Allan Eason (#2) and Makail Cottingham (#15) accounted for nearly 50 percent of the 55 points with 27 seven points combined. Senior guard Ben Smenda(#22) added to the point total for the Redmen adding eight points, all in pivotal moments of the game.

The Pirates had a tougher time getting points on the scoreboard, with only eight points in the first quarter. Rocky River’s leading scorer was sophomore guard, Tommy Ruma (#20), with the total of 11 points. Sophomore guard Cristain Dean (#5) and junior forward Grant Eversman (#33), poured in a respectable seven points each.

The Parma Redmen came out very aggressive early and played very good pressure defense against Rocky River. The Pirates were unable to get anything going against the Redmen, with just swinging the ball from point to the wing and occasionally to the corner before turning over the ball. Parma jumped on a early lead 6-5, after the layup on the left side by junior guard Jared Evans (#4), finishing through the contact and converting on the free throw.

The Pirates also came out of the gates aggressive, by pressing the Redmen. The Pirates were able to come up with a crucial steal and also to draw the charge on one of Parma’s fastbreaks. Parma was able to score with a three-pointer from junior guard, Kevin Ivancic (#5) and a free throw from Eason with time winding down in the first, with the Redmen leading, 17-8.

The second quarter started off with a three made by Ivancic, to make it 20-8. Rocky River also knocked down a three from junior forward, Luke Coyne (#22) assist from center, Joey Coffman. Coffman also added a layup himself around the 4:45 minute mark. The shot started to fall for the Pirates, as junior forward, John Ruma (#15) knocks down a three pointer. Sophomore Ruma (#20) hits two key three pointers, to help bring the Pirates closing, but still trailing at end of the first half, 28-25.

However, the third quarter defense from the Redmen was exceptional, by only allowing the Pirates to score four points in the frame. The Redmen came up a steal and were rewarded with a three-pointer from Evans, forcing the Pirates to call a timeout. Rocky River transitioned to a zone defense, to see if they could slow down the Redmen’s offensive attack.

Parma slowed down their approach by swinging the ball, and looking for an open shot after two offensive rebounds for the Redmen. Smenda was able to lay in a crucial bucket after the rebounding frenzy. Coyne was also able to hit an important jump shot, with assist from junior forward, Ryan O’Donnell (#32), the Redmen were able to finish the third quarter in the lead, 40-29.

With the sudden cramping of an impact player for Parma, Cottingham, the Pirates capitalized on the injured and youthful Parma squad. The Pirates forced three turnovers in a matter of just 30 seconds, both courtesy of senior forward, Matt Popovich (#34), with him converting on one of the steals with a bucket and made free throw. With 2:07 left, Rocky River was able to steal the ball yet again and was able to score on the other end, making the score 46-40, Parma.

However, Parma was able to steal the ball away two times in crucial situations, and was also able to extend the lead with a layup from Eason. Cottingham also had two made free throws while in the bonus.

After the game Parma head coach, Mike Durkin, emphasized that he was happy with his young team on the defensive side.

“Today I believe we did a better job not taking defensive possessions off,” he said. “We have talented kids we can score the ball and go, go, go. We can make our identity and defensive identity I think we will be good.”

He also added on the turnovers late in the game, saying, “Late in the game we are up fifteen we started throwing it all over the place. Point guard goes down, freshman Makail, and we start giving the ball away, they go out on a 8-0 counting it down to six, so we want to do a better job of being organized in our pressure, being strong with ball and not giving it away.”