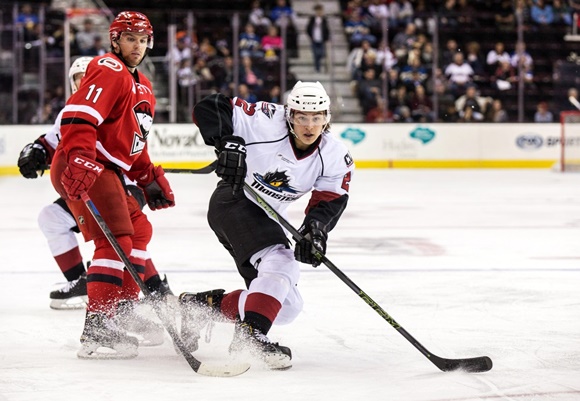 In advance of a Friday road clash vs. the Chicago Wolves, Lake Erie Monsters left wing Sonny Milano was called up by the NHL’s Columbus Blue Jackets for the first time and defenseman Dean Kukan was added by Columbus on emergency recall for the second time this season, the Monsters announced Wednesday.

Selected by the Blue Jackets in the first round of the 2014 NHL Entry Draft (16th overall), Milano has 12 goals, 27 points, 18 penalty minutes and a +10 rating to his credit in 48 AHL appearances for the Monsters this season.

An undrafted native of Zurich, Switzerland, Kukan, 22, notched three goals, ten points, six penalty minutes and a +1 rating in 29 appearances for the Monsters this year and logged two appearances for Columbus in his lone previous call-up this season.

A 6’1”, 205 lb. left-handed native of Massapequa, NY, Milano, 19, contributed 12 goals, 32 points, 18 penalty minutes and a +3 rating in 58 career AHL appearances spanning the past two seasons with the Monsters and the Springfield Falcons. In 50 OHL appearances for the Plymouth Whalers during the 2014-15 season, Milano collected 22 goals, 68 points and 24 penalty minutes.

Milano spent two seasons with the USA Hockey National Team Development Program in Ann Arbor, MI from 2012 to 2014 and posted 14 goals, 39 points, 21 penalty minutes and a +21 rating in 25 USHL appearances for the USNTDP U17 team in 2013-14. In international play, Milano helped Team USA claim the Gold Medal at the 2013-14 IIHF U18 World Junior Championships and the Bronze Medal at the 2015-16 U20 World Junior Championships.

Prior to his time in North America, Kukan, a 6’2”, 198 lb. undrafted, left-handed blue-liner, posted eight goals, 29 points, 26 penalty minutes and a +19 rating in 125 SHL appearances for Lulea spanning parts of four seasons from 2011 to 2015. Kukan has also logged time in the Swiss National League and represented Switzerland in international play.

Next up for the Monsters, it’s a Friday road clash vs. Chicago with full coverage underway, live from Allstate Arena in Rosemont, IL, at 8:00 pm.