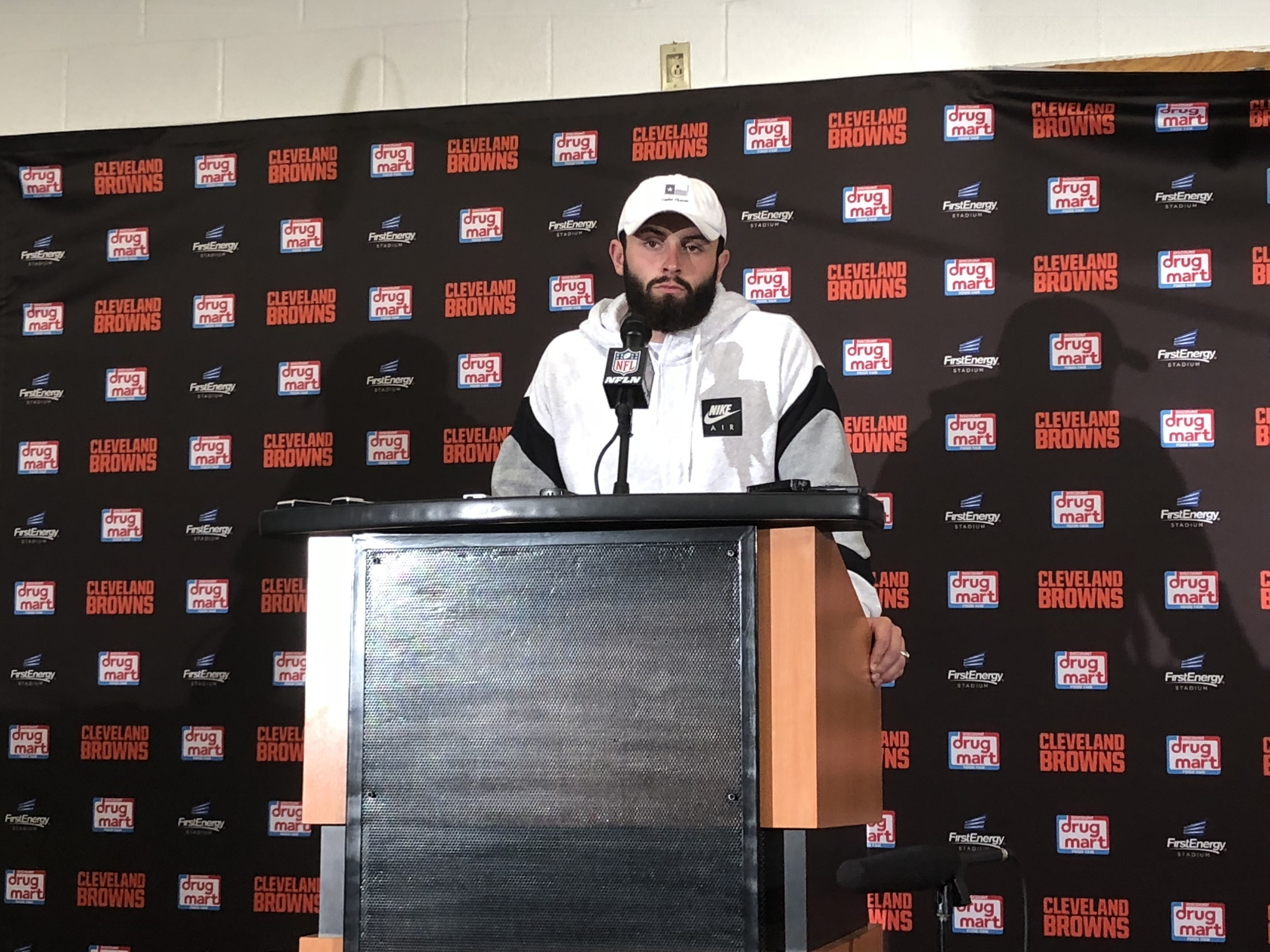 BEREA, OH — Rookie quarterback Baker Mayfield expects to learn a lot about his teammates in the aftermath of Hue Jackson’s firing earlier this week

“With all the distractions, we will see what kind of men we have in this room,” Mayfield said Tuesday, speaking for the first time since Jackson was fired. “Not what kind of team that we have but what kind of men can handle a distraction the right way, can come together and focus on doing their job and doing it at a high level against a great team coming Sunday.”

That team is the explosive 7-1 Kansas City Chiefs. With Jackson out of the picture the team promoted defensive coordinator Greg Williams to take over as the organization’s head man. The Browns also moved on from offensive coordinator Todd Haley shifting running backs coach Freddie Kitchens into that role. So much sudden change with a game looming in five days is far from ideal. That goes two-fold for Mayfield, who eight games and five starts into his rookie season has lost two of the coaches largely responsible for his development to this point.

“For me, it being the first time I have experienced something like that midseason was surprising on all fronts,” the No. 1 overall pick admitted. “Specifically, it does not really matter if it was one or both. It was just surprising to me. I have never gone through anything like that. That is my ‘welcome to the business moment,’ I think.”
Reports of infighting between Jackson and Haley are one of the major factors that contributed to their demise here in Cleveland. Their head-butting took center stage in an episode of Hard Knocks when Haley challenged Jackson giving players the day off back in training camp.
The animosity between the two didn’t stop once the cameras were turned off either. That became clear after Jackson threatened to take back the play-calling duties from Haley following a Week Seven loss to the Buccaneers. Mayfield did his best to block out anything going on between his two former coaches.
“Tried not to see anything else besides doing my job,” he explained. “Like I said, I am taking it one day at a time. I am learning as we go throughout these things. Whether there was or not, I do not stick my head into that stuff. I stick to doing my job, being around these guys and trying to improve every day.”
Shocking as the dismissal of two key coaches may have been for Mayfield and others, the rookie sees the situation going one of two ways for the team: it will either be a distraction or serve as a rallying point. Ideally, the Heisman winner hopes it’s the latter.
“This locker room can become a lot tighter,” Mayfield asserted.” I have not been through a midseason change, but when [former Oklahoma Head Coach] Bob Stoops stepped down and [Oklahoma Head Coach] Lincoln Riley was [named] the head coach, that was kind of the same situation. It was different. It was new to us. We used that to come together. I expect the guys in here to be grown men, to be experienced football players and to handle it that way and keep that same mindset of that we have the same goal.”
Speaking of his former coach at Oklahoma, Riley has been one of several names linked as a possible Browns head coaching candidate. Following Jackson’s firing Monday, Riley told the Oklahoma media that he wasn’t necessarily ready to make the leap to the NFL at this stage of his coaching career. Mayfield shared his thoughts on the possibility of being reunited with the man who helped turn him into a Heisman Trophy winner and the first overall pick in the draft.
“I love Linc, but we have what we have,” Mayfield said. “He is doing his thing and, I am doing mine. Not worried about that. Coach Williams is our head guy now, Freddie is our offensive coordinator and we need to roll with that. We need to believe in that. We have the team that is capable of winning in this locker room. Have to trust that.”
The time to decide if Riley is the next-man-up to be the Browns head coach will come during the offseason. In the meantime Mayfield is focused on the present and that’s uniting around Williams for the final eight games of his rookie campaign.
“[He’s preached] sticking together,” Mayfield stated. “We have this. It is what it is, but we have to push forward. We have a game this week and that is the important part. We can either use it as an excuse to throw in the towel or to rise up and come together as a team.”
Follow: @Spencito_
Related Topics2018 Cleveland BrownsBaker MayfieldGreg WilliamsHue JacksonLincoln RileyTodd Haley