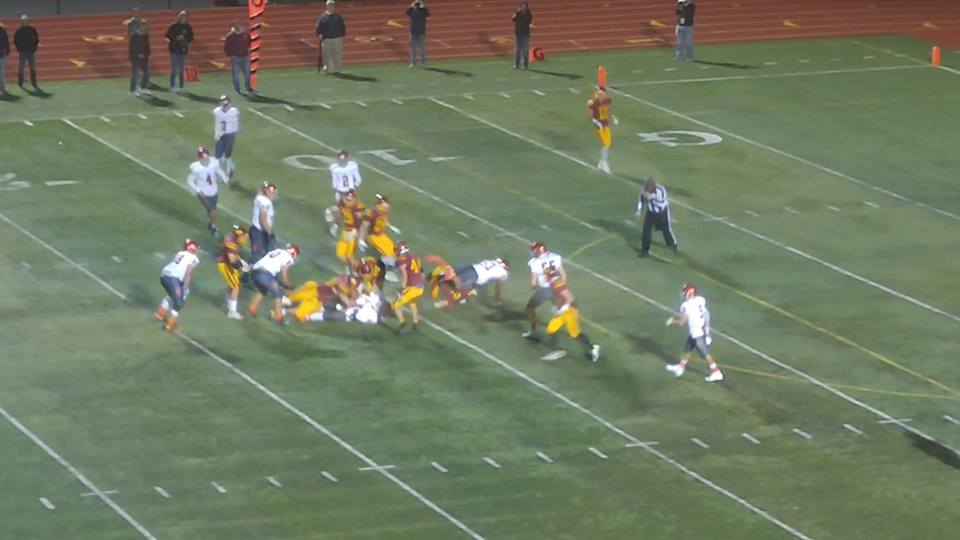 This game recap is brought to you by Mullins Construction. Your premier home remodeling option.

AVON LAKE, OH – In a battle of the two of the very best in the SWC it was Avon Lake remaining unbeaten with a 49 -21 victory over Berea-Midpark. The game was tied at 21 early into the third quarter, but an avalanche of mistakes by the Titans, and excellent execution by Avon Lake, turned a close game into a blowout quickly.

Konnor Riggs had another career night in a season that has seen several of them. Riggs finished with 224 yards on 32 carries, scoring three times on the ground. His performance mixed in with Jack Mikolich who had two touchdowns in the air, and one on the ground, was too much for any team to handle.  There is a reason this team is 8-0 and will be a tough team for anyone to try to defeat.

The Titans who typically play fast paced mistake free football, couldn’t avoid several costly turnovers, dropped passes and penalties. They also let up several big kick and punt returns that continuously gave the Shoremen short fields to work with. The Titans committed 4 turnovers in all and had quite a few costly penalties that wiped away successful third and long conversions.

Titan Quarterback Trevor Bycznski threw for 221 yards on 21 of 36 passing with 1 touchdown. He also threw three picks and fumbled once on a rough night. With the weather rainy, and several dropped balls not helping the young gunslingers cause.

One of the few bright spots for the Titans tonight was the play of powerful running back, Bryce “The Beast” Agnew. The senior tailback finished with 107 yards on 14 carries, along with 26 yards on 4 catches. He was also in on several big tackles on defense throughout the night. Also having one of the biggest nights of his season was Omar Siggers, with 66 yards on 5 catches.

The Titans began on their own 15-yard line and earned a first down on their first three plays from scrimmage to quickly reach midfield. A few plays after that it was the Titans cashing in as Bycznski hit a streaking Jon Lyons in stride from 16 yards out to draw first blood. Siggers had two big catches on the drive to move the chains.

The Shoremen wasted no time answering with a scoring drive of their own the first time they touched the ball. Their score came off of a bullet pass over the middle from Mikolich to Luke Fedders. The score was set up from some very impressive running by their bruising back Riggs who compiled 30 yards on that drive alone.

After forcing a three and out, Fedders would continue his hot start by returning the Titan punt to the opposing 22-yard line, putting the Shoremen in prime position to score. They did just that on the very next play as Riggs took it in to put the Shoremen ahead.

This time it was the Titans who answered to tie the game. Excellent plays by all 3 running backs, Agnew, Jabriel Williams and Anthony Miller paid off big time. The final rush coming from Miller who scored from 28 yards out to tie it at 14-14 as the first quarter ended shortly after. The second quarter remarkably saw no scoring, and the score remained tied at 14 at the half.

Griffin Lidyard caught his first reception of the season in the opening minutes of the second half. He made it count as it was a 3-yard play action fake executed beautifully by Mikolich for a touchdown. This allowed the Shoremen to reclaim the lead.  The Shoremen are excellent at the goal line on both sides of the ball.  Another big reason they are unbeaten at this point in the season.

The Titans showed the heart that have fans of the SWC loving their style of play. They answered almost immediately. On a fourth and inches from the Shoremen 24-yard line, head coach Jon Hunek showed no fear and called for Agnew to get the needed yardage. Not only did the powerful back get the first down, but picked up every yard in front of him to score on the play.

The game wouldn’t remained tied long as the Shoremen took advantage of two short fields to score twice in a little under 4 minutes. The first on a Mikolich quarterback sneak from the one-yard line. Bycznski would then fumble the first snap when the Titans got the ball back, allowing the Shoremen to once again cash in on a short field. This time it was Ryan McCrum from 11 yards out to bust the game wide open at 35-21.  They were just getting started.

The Shoremen would end all doubt on the second play of the fourth quarter, as following Bycznski’s second interception of the game, Riggs scored from 1 yard out. It put the game out of reach at 42-21 with 11 minutes left to play.

Following Bycznski’s third interception, the Shoremen went back to work. With the game’s outcome already locked up, it didn’t stop the Shoremen from putting another one in. Riggs rumbled in from 8 yards out to increase the lead to 49-21. It was all part of a 35-point, second half explosion where the Shoremen were able to capitalize on every Titan mishap.

Avon Lake will look to stay perfect next week as they travel to Olmsted Falls in what should be the toughest game all season for them. The Bulldogs are battling for their playoff lives while the Shoremen chase perfection. Berea-Midpark will return for their regular season home finale as they host North Olmsted on senior night.

Tonight’s player of the game is Avon Lake RB Konnor Riggs with 224 yards on 32 carries with 3 touchdowns.