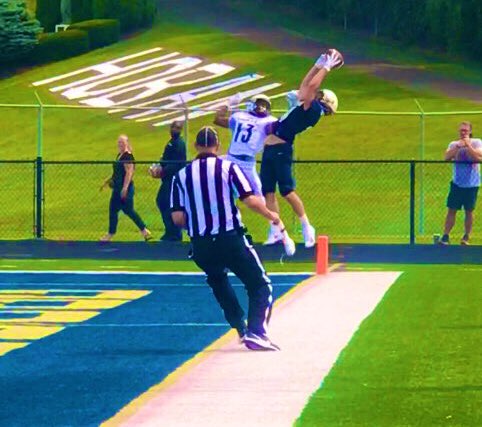 AKRON, OHIO – When the Cougars of Harrisburg made the 305 mile trek to Hoban’s Dowed Field, they probably didn’t expect to be sent home with a 30-point loss.

But that’s exactly what happened, as Hoban delivered a 42-12 thrashing to the defending PIAA Class 6A Runner-Up.

It didn’t take long for Hoban’s explosive offense to get on the board this season. Quarterback Shane Hamm delivered a strike to his receiver Brayden Fox on the first play from scrimmage, putting Hoban on top 7-0.

Hoban’s defense would then swarm Harrisburg to force a three-and-out. Hamm and company would then lead a methodical drive downfield, taking up a solid portion of the 1st quarter.

Trayanum would continue to make his presence felt early, reeling in a 10-yard touchdown pass from Hamm.

Harrisburg would then begin a solid drive downfield, picking up two first downs before Michigan State commit Devin Hightower took an interception the other way for six. This would swell the Hoban lead to 28-0 early in the 2nd quarter.

Hoban would quickly get the ball back, with Hamm finding Alabama commit Caden Clark in the end zone for an 8-yard touchdown. This would grow the Knight lead to 35-0.

Harrisburg was able to avoid a first half shutout however, as Donte Kent hauled in a late touchdown completion to make the score 35-6.

Hoban would start the second half with a door slamming 14 play touchdown drive, making the score 42-6.

At this point, the running clock rule came into effect, and most starters were pulled from the ballgame.

Before the game clock hit triple zeroes, Harrisburg would add a touchdown completion from John McNeil to Trevion Carey.

A missed extra point would seal our final score of 42-12.

With the win, the Knights would extend their winning streak to an impressive 30 games.

Archbishop Hoban (1-0) will host Youngstown Cardinal Mooney (1-0) next Friday, while Harrisburg (1-1) will head back to Pennsylvania to face Cedar Cliff (1-1).