After Winning 2018 NBA MVP, James Harden Dismisses Idea Of LeBron Joining Rockets In Free Agency: “We’re Great With What We Have” 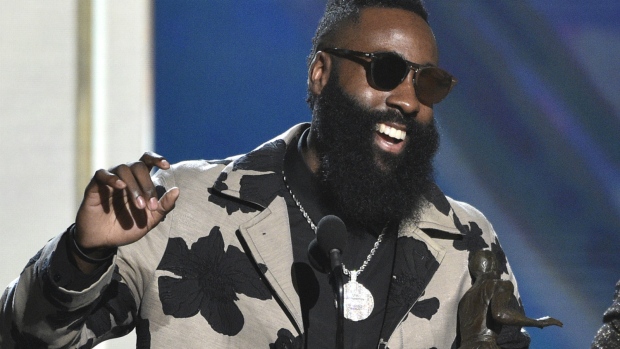 The “Summer Of LeBron” is once again upon us for the third time and everyone is jockeying for prime position to land him. With only a few destinations making the most sense for James to land, the argument has now become “what makes the most sense for LeBron?” this time around.

During a presser highlighting his first NBA MVP honor, Houston Rockets shooting guard James Harden was asked about the idea of LeBron joining him and Chris Paul out west next year.

His response wasn’t what you’d expect from a guy who is searching for his first NBA Finals appearance since 2012.

Rockets’ James Harden doesn’t sound like he’s in “Recruit LeBron James” mode: “We were a half away from the Finals. I don’t think there’s a piece we need to bring in or take away. We’re great with what we have.” pic.twitter.com/FuSTrE9tyr

“We were a half away from the Finals,” Harden told reporters on Monday night. “So I don’t think there’s a piece that we need to bring in or take away. We’re great with what we have, from top to bottom. From front office to coaching staff to players, personnel. So our main focus is getting better, getting healthier and then doing what we do.”

It sounds like Harden isn’t too interested in teaming up with LeBron James, which would put him on a short list of players that would prefer not to play with James. Of course, Harden was also riding the high of being named the top player from this past NBA season. That might’ve also played into his answer from last night, though it could be one he might regret a few months down the line should Houston fail to acquire LeBron.