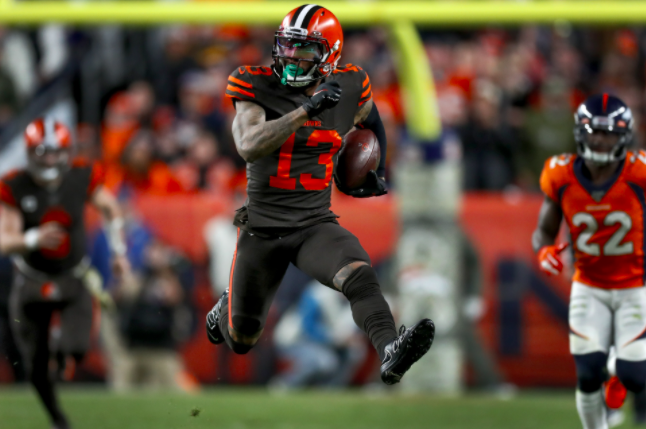 I recently wrote an article about how WR Odell Beckham Jr. truly felt watching his team win a huge playoff game against the Pittsburgh Steelers.

Following that win, something was missing in the loss to the Kansas City Chiefs in the divisional round. Quarterback Baker Mayfield went 23/37 for 204 yards, a touchdown and an interception. Not a bad stat line, but it’s not one that would blow anyone away. Obviously, it wasn’t enough to win the game.

What the Browns were missing on the offensive side of the ball was that wide receiver able to stretch the field. A player that is a threat to catch a deep pass for a touchdown at any given moment. That man for the Browns was supposed to be OBJ.

The Browns had plenty of success this season when OBJ got hurt and was out. I even wrote an entire article about it as shown above. However, despite the fact that I love WR Jarvis Landry and the rest of the Browns’ pass catchers, the deep ball threat was lacking against the Chiefs.

Before sustaining the ACL injury, OBJ had 23 catches for 319 yards and three touchdowns (seven games played this season). Many felt as if the connection between OBJ and Baker Mayfield wasn’t there. That Baker would try and force the ball to Beckham Jr. because of his “superstar” status and it would affect the entire offense.

I’m not denying that because I believe it was the truth. However, losing in the playoffs brought up the sobering reality that the Browns offense needs help.

Even coach Kevin Stefanski said in a text to OBJ that he can’t wait to have him back next year.

This all leads up to the idea that Baker is going to have to figure out how to play quarterback with OBJ lining up as a receiver of his in the coming year. It is possible but will take work between the two, the coaching staff, the other receivers and more. This can be done throughout training camp and the preseason.

Baker will have to eliminate the idea that the ball needs to be forced to OBJ because of that aforementioned status. He will need to learn to get the ball to the former Giant at the proper times while sustaining the offense as a whole.

If a healthy OBJ played in the game against the Chiefs, the entire Browns offense would have been different. A deep ball here, a deep ball there and it could be Cleveland playing in the AFC Championship game and not Kansas City.

Let’s say the Browns are just done with OBJ and take on what I said in my previous article about a trade or something of that nature. While that seems unlikely because our head coach texted with him about his excitement for next season. If the Browns do move on from OBJ, his spot will need to be filled with another receiver that is able to stretch the field, catch those deep passes and become that threat the Browns could’ve used in the loss. The team can address that in free agency or a draft pick.

Regardless, here’s to a speedy recovery for OBJ.