Is Colin Kaepernick Finally the Answer at Quarterback for the Browns? 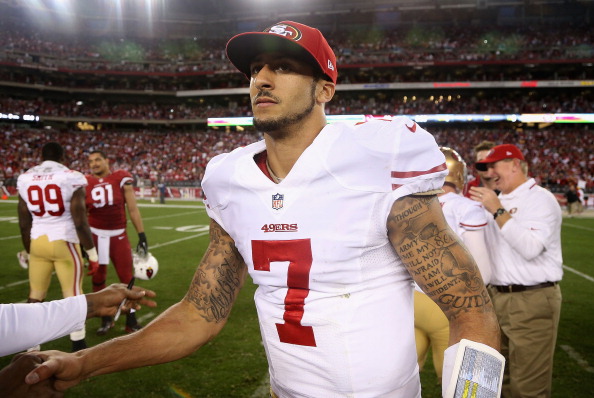 The Browns endless pursuit for a franchise quarterback as started again, and it appears that this round of quarterback roulette may take them all the way to San Francisco, ready to grab 49’ers embattled QB Colin Kaepernick.

Kaepernick was a rising star in the NFL just a few years back, leading the 49ers all the way to the Super Bowl, where in a loss to the Ravens, his stardom was overshadowed by the fact the two opposing coaches in the biggest game of the NFL that season were brothers.

That was the 2012 season, a year in which Kaepernick took over the Niners starting QB job midway through the season, and got them to the biggest stage in the NFL.

He also led the Niners to three fourth quarter game-winning drives that season, showing the toughness and ability that most quarterbacks who were just in their first season didn’t show.

Now, three seasons later, Kaepernick is ready to be on the move, and the quarterback starved Browns appear ready to give up a third-round draft pick in order to bring him to Cleveland.

It’s an interesting story about a fall from grace for a QB that last year went 2-6 as a starter before finally being shown the bench for Blaine Gabbert.

Is Kaepernick finally the quarterback that could end the Browns streak of clunkers under center?

It’s not the first time they have looked to a former Niners QB to solve their throwing woes, as they picked up Jeff Garcia in 2004 but he only lasted a season with the Browns.

Some feel that Kaepernick, who is still just 28 years old, and he’s got plenty of football left in him, and if the Browns do give up a third round pick and go through the saga of restructuring his deal, they hope that his best football is left.

The concern for Browns fans is he’s just yet another retread player who maybe isn’t going to recover and be able to be the player the Browns need to finally lead them to being competitive in the NFL.

What will he bring to the Browns if the deal is made?

A veteran presence of a quarterback who has played in 57 games in five seasons, starting 47, one that has already played in a Super Bowl and has that ability to handle that media pressure.

He also has thrown 56 touchdowns and 26 interceptions, and also can run the football, escaping pressure and rushing for 1832 yards and 11 scores in his five seasons with the Niners.

Between Kaepernick and Robert Griffin III, the other high profile quarterback that teams who need a QB are looking at, Kaepernick has the better and more consistent track record.

It’s the first real big decision of the Browns new regime, one that could signal a rise to being a better football team, or one that could lead to more pain and suffering for an organization that has tried over and over to land a franchise quarterback.

Is Kaepernick the answer?

It remains to be seen, but it’s one risk that the Browns clearly look ready to take.