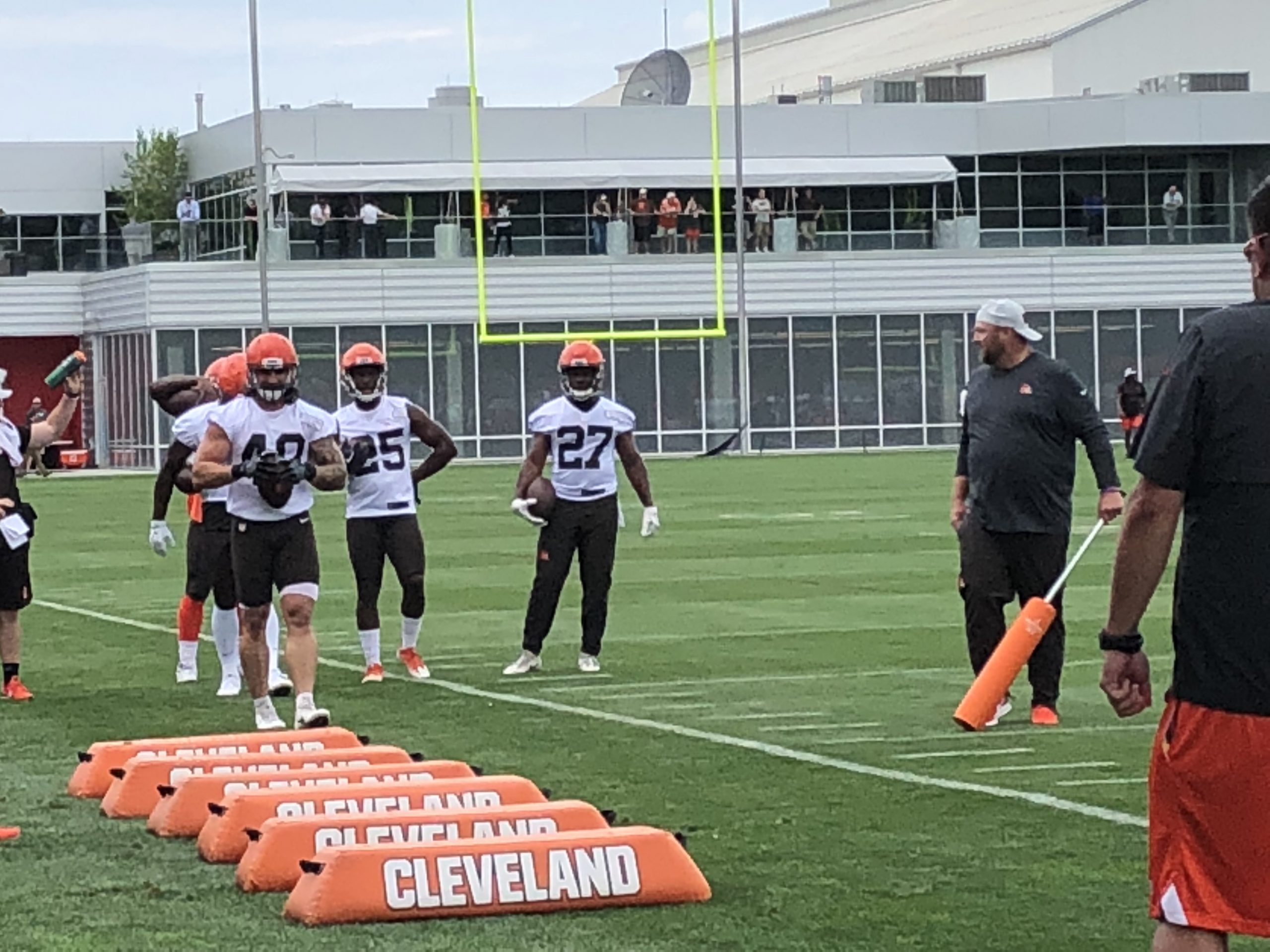 Browns buzz is at an all-time high heading into the 2019 season. That’s because general manager John Dorsey used the offseason to assemble what figured to be a juggernaut of a roster. Odell Beckham Jr. was the grand prize, of course, but additions along the defensive line, in the backfield and the secondary have the Browns looking poised for a historic season.

It all starts next Thursday when the first training camp under new head coach Freddie Kitchens commences out in Berea. As training camp gets going, some starting roles on the depth chart are already a given. It’s not like anyone is challenging Baker Mayfield at quarterback. Conversely there are a handful of other roles that have yet to be determined.

The three weeks of training camp will help determine what the final depth chart looks like by Week One. Here are five position battles you’ll want to follow.

Odell Beckham is the obvious top dog at wide receiver. Jarvis Landry will fall in behind him as the No. 2 wideout, but has made a career out of being an elite slot receiver, leaving one other receiver spot open opposite of OBJ. The primary candidates for the job are Rashard Higgins and Antonio Callaway. Higgins developed quite the connection with Mayfield in 2018, putting together his best season to date. the 24-year-old hauled in 29 passes for 572 yards and four touchdowns – all of those numbers were career highs. Callaway had the upper hand over Callaway last year in terms of snaps, which resulted in slightly better numbers of 43 receptions, 586 yards and five scores. While Callaway proved he could be a serious deep threat in spurts, particularly late in the season, he had the dropsies throughout his rookie campaign as well. That’s something he surely wants to improve on this year and his ability to show more consistent hands in training camp could go a long way in determining who slides into that wide receiver three role. End of the day, both Higgins and Callaway will see plenty of playing time this year but those two will duke it out all training camp and you’ll want to watch.

Aside from concern over sustaining multiple concussions in his rookie season, Denzel Ward did more than enough to prove he’s a budding lockdown corner. With Ward holding down the left side of the defensive secondary, it’s open competition for the right side cornerback. The pre-camp assumption is that ball-hawking second-round pick Greedy Williams will ultimately get the job but it’s not just going to be handed to him either. Williams comes to camp looking to prove that his draft-slide into the second round was a fluke and earn the job outright over Terrance Mitchell and even Eric Murray, who was traded to Cleveland from Kansas City this offseason. How that battle shakes out could go a long way in determining just how dominant the Browns defense will be this year.

Often times when a new general manager takes over a franchise he’ll purge the roster of players from the previous regime. John Dorsey has slowly but surely been doing that himself, to the point where only six players drafted by former VP of football operations Sashi Brown remain on the roster. One of those is Joe Schobert, who was the subject of bevy of trade rumors this offseason. Dorsey was unable to move the 25-year-old to this point, so he enters training camp slated as the starter at middle linebacker. He could have some competition though, in the form of fifth-round pick Mack Wilson. Wilson went later than expected in the draft and his ceiling could easily be starting middle linebacker in the NFL. Expect the rookie to come to training camp looking to prove himself, which, combined with Dorsey’s reported willingness to move on from Schobert, could push them into a must-watch position battle.

The Browns re-committed to Greg Robinson at left tackle this offseason and rightfully so. After holding his own protecting Mayfield’s blindside late in the season, Robinson earned the one-year $9 million contract he signed back in February. But it’s hard to say if Robinson –labeled a bust after being the No. 2 overall pick in 2014 – is a bonafied long-term solution at the position. The one thing working for him is that there isn’t much competition behind him on the roster. If he struggles during training camp though, don’t be surprised if Kitchens gives some other players a shot at the left tackle spot, much like Hue Jackson did last training camp.

Browns fans certainly didn’t snatch up all those training camp tickets to be the first in line to ooh and aah at kickers every practice. But just because kicker isn’t the most luxurious of position battles to watch doesn’t mean it’s not important. Greg Joseph was fine last season, hitting 17 of his 20 field goal attempts – his three misses all came beyond 40 yards. What is a bit concerning is that he missed four PATs in 2018. By no means is it a given that Joseph will be the starting place kicker come Week One and his challenger is fifth-round pick Austin Seibert out of Oklahoma. Some fans were critical of the Browns decision to draft a kicker in the fifth round back in April but if Seibert can show the consistency he did in college – he hit a school record 162 extra points in a row and is the leading scorer in FBS history with 499 career points – then the pick could end up being well worth it as he could definitely overtake Joseph.

Podcast: CLE Sports Talk with Casey Drottar – 7.15.19
Baker Mayfield says starting his rookie season as a backup was an organizational decision, in new feature with ESPN