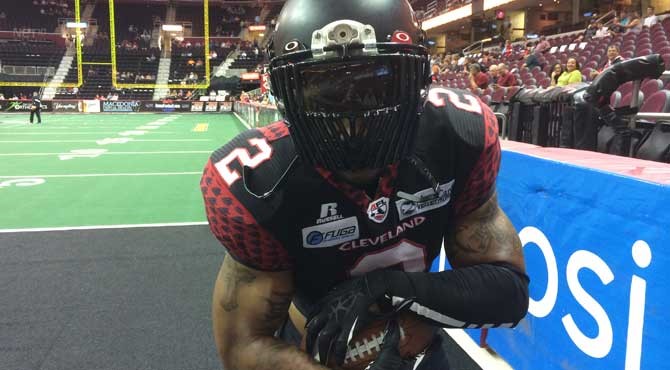 Former defensive back for the Cleveland Gladiators Dominic Jones, who retired from playing in the AFL earlier this year, has joined the Gladiators staff as the secondary coach for the team.

Jones was only 5’9 and 190 lbs. but because of hit hart hitting and extremely physical play on the field, he was one of the most feared corners in the league.

His leadership was unmatched and was a major factor in the 2014 season when the Gladiators went 17-1 in the regular season (only losing to the Pittsburgh Power in Pitt) and made a run through the playoffs and eventually hosting the Arena Bowl against the Arizona Rattlers.

The Cleveland secondary were self-declared as the “No Fly Zone.”

Jones had an interview with the Gladiators media team on Thursday, March 3rd.

“I’m excited,” Jones expressed. “Obviously I played the majority of my career in Cleveland so to be able to continue that in a coaching aspect under Coach [Ron] Selesky and Coach [Steve] Thonn, two of the best minds in the AFL, I couldn’t ask for a better opportunity. I’m just happy to be able to stay in the game.”

With Jones helping the secondary he was a part of just last year, this defense will continue to make noise that it has made in the past 2 years.

Another big story for the team is that Wide Receiver Dominick “Goodie” Goodman will be returning for his sixth season. He is the all time franchise leader in receptions (727), receiving yards (7,280), and touchdowns (132).

He also earned two All Arena honors and one of them came in 2014 with the historic run. Goodman is a native of Cincinnati, OH. where he also played his college ball.

No comment for the media yet from Goodman but the coaches say that they’re extremely happy to have the always smiling WR back.