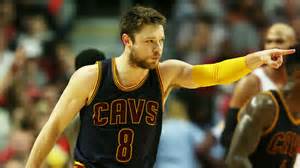 Matthew Dellavedova is a restricted free-agent, which means Cleveland can match any offer from outside teams to re-sign the point guard. However, there have been multiple reports that the Cavs are unlikely to re-sign the 25-year-old point guard.

ESPN’s Dave McMenamin reported on Thursday that the New York Knicks, Brooklyn Nets, Philadelphia 76ers, and Detroit Pistons are all teams that could be interested in signing Delly.

If Dellavedova were to join another team, the Cavs would still have Mo Williams, Jordan McRae, and Kay Felder as backup point guard options.