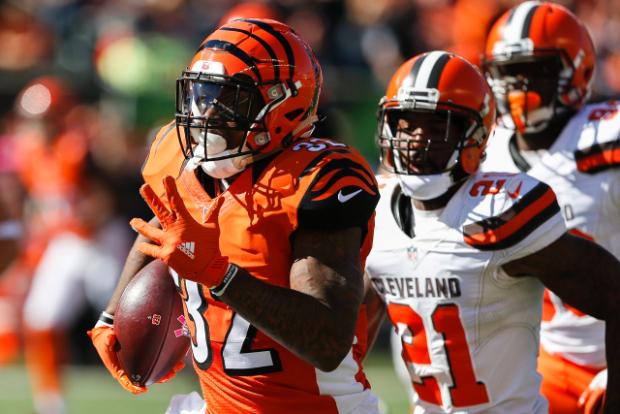 The Cleveland Browns looked to win the Battle of Ohio against the Cincinnati Bengals but fell short defensively to lose 31-17.

Like most of the games this year, the Browns defense got gashed by the run game in the first series. It took only seven plays with 54-yards rushing yards to set up the 5-yard rushing touchdown by Giovanni Bernard to go up to a quick 7-0 lead. Although the Bengals are missing their former offensive coordinator Hue Jackson, they had no trouble balling out on the young Browns defense. Through the first quarter, Andy Dalton only missed 4 passes on the banged up secondary of Cleveland. The Bengals did end up missing a 40-yard FG attempt to keep it a one possession game

It seemed as though the Browns rushing attack was getting back on track. on their second drive of the game, RB Isaiah Crowell, although he sat out for a crucial 3rd and 2 in the redzone, rushed for 31-yards with a 20-yard burst to the 49-yard line of the Bengals. However, with Crowell on the sideline, Duke Johnson was stopped short of the first down and the Browns were forced to kick the FG to make the game 7-3. Backup QB Kevin Hogan even had 3 carries on the read option plays for 48-yards in the first half. Crowell did find the endzone for a 3-yard rushing touchdown to go up 10-7 .

The Browns have had success against the pass on short, easy passes all season but have struggled defending the big plays and that was the case here again as Dalton found WR Brandon Lafell for the 44-yard strike to get the lead once again going up 14-10. With Browns QB Cody Kessler being evaluated for a concussion, Hogan had to come in and was making decent throws against a solid Bengals defense. Like all new Browns QB’s, TE Gary Barnidge was a safety blanket and was targeted tree times but caught two passes for 25 yards on the drive but couldn’t convert and were forced to punt yet again as the half ended with a Hail Mary from Dalton to AJ Green for the 21-10 Bengals lead.

With Kessler ruled out with a concussion, it was time for Hogan to show what he could do against the Bengals. He started off rough with a few hits and short passes but with help from Crowell eating up big chunks of yards, the Browns capped off a drive with a 28-yard touchdown run by Hogan to make this a four point game. The Bengals would not be shown up in their stadium as Jeremy Hill broke off a 74-yard and basically untouched rushing touchdown. After Kevin Hogan’s electric start, there wasn’t much to brag about. He did throw an interception that the Browns stripped away and recovered. The Bengals weren’t doing much with their time either and kicker Mike Nugent missed a 45-yard field goal after missing a 40-yarder earlier.

Kevin Hogan, late in the fourth quarter, went over 100-yards rushing but couldn’t get his arm under control and had trouble throwing the ball. Hogan willed his way close to the redzone to try and dig in to the Bengals lead even though time was not on the Browns side at this point. He dropped back for a pass and his arm was hit while throwing and intercepted to seal the game for the Bengals 31-17.

The Browns, still looking for their first win of the year, will play the struggling New York Jets next Sunday.