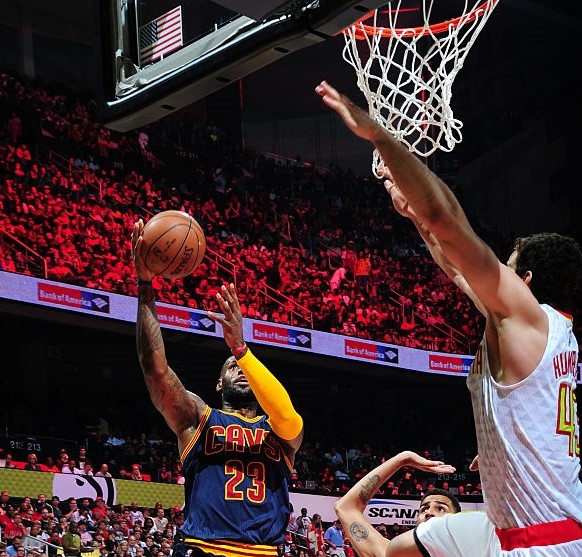 The Cleveland Cavaliers played the second night of a back-to-back in Atlanta taking on the Hawks on Friday night.

The game had a playoff feel, as Cleveland built a big lead, watched it dwindle, and found themselves in an overtime showdown, but held on to win 110-108.

It was an even start to the game, and the Hawks made the first big highlight of the night, with Al Horford throwing down a monster dunk off of a lob from Jeff Teague to tie the game at 7.

Atlanta would then jump out to a 14-10 lead before Kyrie Irving made a nice block on the defensive end, to keep it a four-point game.

The Hawks would lead 17-10 with 6:37 left in the first quarter, but the rest of the quarter belonged to Cleveland, who rallied back and went on a 17-4 run, capped off by LeBron James making a difficult layup in transition look routine as he does so often.

LeBron is TOO strong in transition on @ESPNNBA! #NBARapidReplay https://t.co/A1eCmKUjgM

The Cavs would lead 32-23 at the end of the first quarter.

Cleveland dominated in the second quarter, taking a 55-34 lead, thanks to one of the best plays of the game, which came came courtesy of LeBron.

Atlanta rallied off seven straight points to end the half and the Cavs would lead 55-41 at halftime.

The Hawks kept momentum going from their good finish to the first half and it carried over into the third quarter, as Teague brought Atlanta within five, gliding to the hoop for a layup.

Atlanta continued to own the Cavs in the third quarter, an area that has been a problem for the Wine and Gold at times this season. The Hawks climbed back to take a 64-61 lead.

The Cavs would answer back to end the third quarter on a good note, leading 77-71 heading into the fourth.

Cleveland would get the lead up to as many as 11, with a great start to the fourth quarter, which included a trademark swipe and slam from LeBron.

Atlanta fought back, a couple of clutch threes from Kyle Korver helped the Hawks reclaim the lead 89-88.

Atlanta would stay in front 94-92 until LeBron found Tristan Thompson for a clutch dunk to tie the game with 53 seconds left in regulation.

The two sides traded baskets and Atlanta would have the ball with 3.8 seconds left and the chance to take a game-winning shot.

Iman Shumpert’s lockdown defense made sure the Hawks would not get that shot off, sending the game to overtime tied at 96.

J.R. Smith set the tone in OT, knocking down his fourth three-pointer of the game.

LeBron came through with a huge block, doing his Dikembe Mutombo impression. Paul Millsap still managed to tie the game at 102.

LeBron James gets up for the big block!#Cavs
(via @clippittv)pic.twitter.com/ztGZQml0mA

LeBron would find Thompson again down low to give the Cavs the lead.

Kyrie Irving would hit five-of-six free throws down the stretch, but Horford tried to take a three at the buzzer to win the game, and fortunately for the Cavs it was no good.

Irving scored 20 points on the night, eight of which came in overtime.

Millsap led Atlanta with 29 points on the night, while Teague was right behind him with 28 points.

The Cavs are off Saturday and return to Cleveland to host the Charlotte Hornets for a Sunday afternoon game that tips off at 3:30 PM.