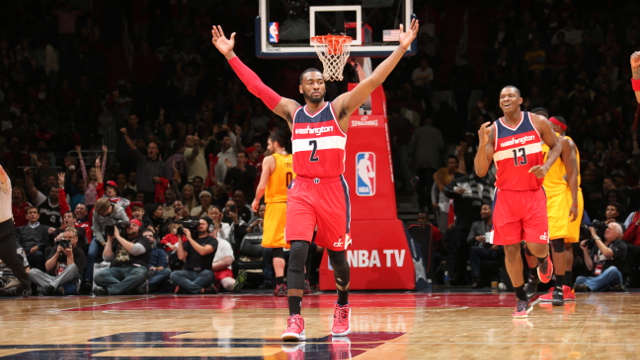 The Cavs hosted the Washington Wizards Tuesday night. John Wall and company handed the Cavs their first loss of the season at home, 97-85. Washington never trailed in the contest.

The Wizards got out to a hot start taking an 10-0 lead to open up the game, including a couple of a steals from Wall and a breakaway dunk.

The Wizards may have caught the Cavs napping the first few minutes of the game, but LeBron James and company got going on a 14-4 run to tie it at 14 apiece midway through the first quarter.

Led by Wall’s eight points, four steals, and three assists in the quarter, Washington entered the second period on top 27-24.

LeBron put the team on his back for a stretch in the second, scoring eight points in the first four minutes of the quarter, bringing the Cavs within one.

Washington would follow that up by going on a 7-0 run over the next two minutes, pulling ahead 44-36 halfway through the second quarter.

Despite having a few wide open looks, Kevin Love was 0 for 3 from beyond the arc in the first half, an uncharacteristic cold night shooting for the power forward.

After another burst from Wall late in the quarter, the Wizards increased their lead to 14 with 2:23 remaining in the first half.

Love wasn’t the only Cavalier having trouble finding the bucket, as Cleveland shot 23 percent from beyond the arc in the half, hitting just 3 of 13 attempts.

Wizards center Marcin Gortat had one of his best nights of the season, scoring ten points with four blocks in the first half, and Washington led Cleveland at halftime 54-43.

LeBron and Mo Williams each scored a dozen in the half, as the rest of the team could not seem to get going offensively.

Jared Dudley put up five straight points to make it a 22-point game with 5:45 to play in the quarter.

The Cavs climbed back thanks to some late-third quarter threes from Matthew Dellavedova and J.R. Smith to cut it down to a 12-point game with 1:48 to play in the quarter.

Delly knocked down another with a minute remaining in the quarter to make it an 11-point game, but Bradley Beal answered back promptly and the Wizards entered the fourth quarter leading 80-67.

The fourth quarter was more of the same for Cleveland, as Wall continued to dominate, scoring ten points in the final period, and the Wizards would close it out to win 97-85.

Wall finished with 35 points, 10 assists, and 5 steals, each of which were game-highs. Beal posted a well-rounded stat line with 18 points, 9 rebounds, and 6 assists on the night.

LeBron put up a team-high 24 points and 13 rebounds, but turned the ball over nine times.

Williams went scoreless in the second half and Dellavedova would finish the night with 15 points off the bench, going a perfect three for three from long distance.

The Cavs had one of their worst shooting nights from three-point range, hitting just 9 of 29 attempts.

After the game, Cavaliers Head Coach David Blatt told reporters, “We didn’t play a very good game tonight. Washington did. That’s what happens when you’re playing in this league.”

The loss makes the Cavs 13-5 on the season and they will travel to New Orleans Friday night to take on Anthony Davis and the Pelicans, tip-off is set for 9:30 PM ET.