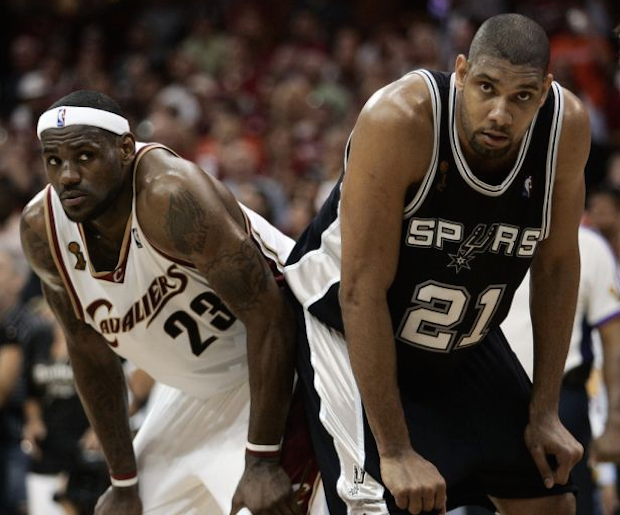 When the Cavaliers take on the Spurs Thursday night in San Antonio, it will be the 38th time of LeBron James’ career that he has faced off with Gregg Popovich, Tim Duncan, Tony Parker, and Manu Ginobli.

LeBron is 17-20 in his career against the Spurs, playing 17 of those games as a member of the Miami Heat and the remaining 20 with the Cavs.

LeBron would continue to blossom into the league’s best player, but when they met in the NBA Finals in 2007, he was no match for the Spurs. It was five against one for the whole series, and San Antonio swept the Cavs in four games.

When LeBron departed for Miami in 2010, there is no doubt that the memories of not having the team around him to compete with the likes of San Antonio factored into the infamous “Decision.”

It wasn’t until his third season in Miami that LeBron had a chance for revenge, only this time he entered the series with more maturity, and some hardware from winning the 2012 NBA Finals over the Oklahoma City Thunder.

Not only did LeBron have more jewelry, but he had more talent around him in the second Finals meeting with San Antonio.

Dwayne Wade, Chris Bosh, and Ray Allen each contributed to Miami’s 4-3 series win over the Spurs, and it seemed that the student had become the teacher, with regards to LeBron overcoming Duncan and the veteran team that had given him his first “Welcome to the NBA” moment. 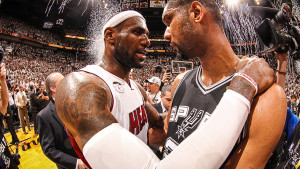 However, one year later, the Spurs returned the favor, due in large part to the emergence of a young talent, Kawhi Leonard. Leonard was in his third season in the NBA in the 2014 Finals, and although he was a very good player in 2013, he became great the following year.

No longer did Duncan, Parker, and Ginobli have to do it on their own, but Leonard began his ascension to star player, averaging 18 points, while shooting 61 percent from the field en route to the 4-1 series victory.

Leonard was named Finals MVP, and as much of that was due to his outstanding defense, as it had to do with his offensive production.

After LeBron’s second time losing to the Spurs in the Finals, he had some more decisions to make. Would he be able to hurdle the team that had his number by staying in Miami? Did he want his legacy to be going 2-3 in his first five trips to the NBA Finals? 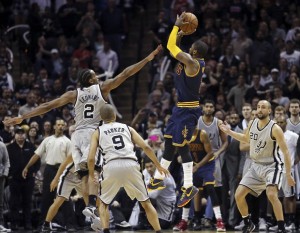 LeBron returned home. Only now, he’s not a star without a supporting cast. He has some help. With the likes of Kyrie Irving, who scored 57 points the last time the Cavs played in San Antonio, and Kevin Love, who has practically mirrored the production of Bosh’s four seasons with LeBron in Miami, this Cavaliers team has no excuses to be over-matched in terms of talent.

The Cavs have depth along with their three stars, with one of the best rebounders in the league, Tristan Thompson, a lockdown perimeter defender, Iman Shumpert, and a marksman from three-point range, J.R. Smith.

But the dynamic has changed in San Antonio, too. While the Spurs’ system and style remains the same, the keys to the dynasty are being handed from Duncan to Leonard, who is having a season worthy of MVP discussion, and newly acquired power forward, LaMarcus Aldridge, who has been improving and meshing with the team more and more with each game. 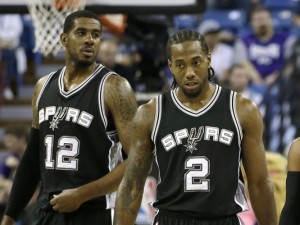 Leonard was already viewed throughout the league as one of the best defenders in the NBA, but thus far in the 2015-2016 season he has taken his offensive game to a new level. The 24-year-old out of San Diego State is averaging 20 points per game and shooting 48 percent from three-point range.

Aldridge is averaging 16 points and nine rebounds per game in 2015-2016, but only scored twenty or more points in four of his first 18 games to start the season.

In the last 16 games, he has scored twenty points or more seven times.

Typically, the Spurs are a team that gets better through the course of the season. They rest stars often. They don’t put too much pressure on the regular season and by March they are clicking on all cylinders.

If the trend continues, it is scary to imagine how great the Spurs can be come playoff time, considering they have the second-best record in the NBA, at 34-6, are a perfect 22-0 at home, and would have the best overall record in the NBA if it were any other season than the historic run that the Golden State Warriors have been making through just about the halfway point.

San Antonio has won nine straight. The Cavs have won eight in a row. The LeBron vs. Spurs rivalry continues, but this may be a turning point in the rivalry, as who knows how much longer LeBron’s prime will last?

Duncan’s days of dominating the league are long gone, but he has two players more than capable of carrying on the dynasty.

LeBron has an amazing talent right behind him in Kyrie, and Love is a comparable player to Aldridge.

So while the history of LeBron vs. the Spurs will always be fascinating and will undoubtedly be the first thing that comes to mind when remembering all the great Finals matchups, this is the beginning of a new chapter in the rivalry that may prove to last much longer than the remainder of Duncan and LeBron’s careers. 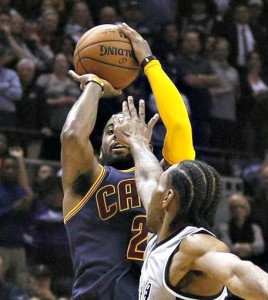 It would be absurd to rule out the Spurs from making the 2016 NBA Finals. Maybe LeBron will get the chance to even the score at 2-2 in head-to-head Championship matchups. But if it does happen, the 23-year-old Irving and 24-year-old Leonard will be equally as captivating stars in the showdown.

Could this be the last time Duncan faces LeBron in San Antonio? Could June be the last matchup between the pair? 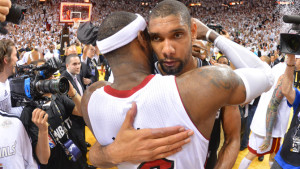 Will the Cavs be the first team in the 2015-2016 season to come away from the Alamo with a victory?