The Browns release their 2018 schedule 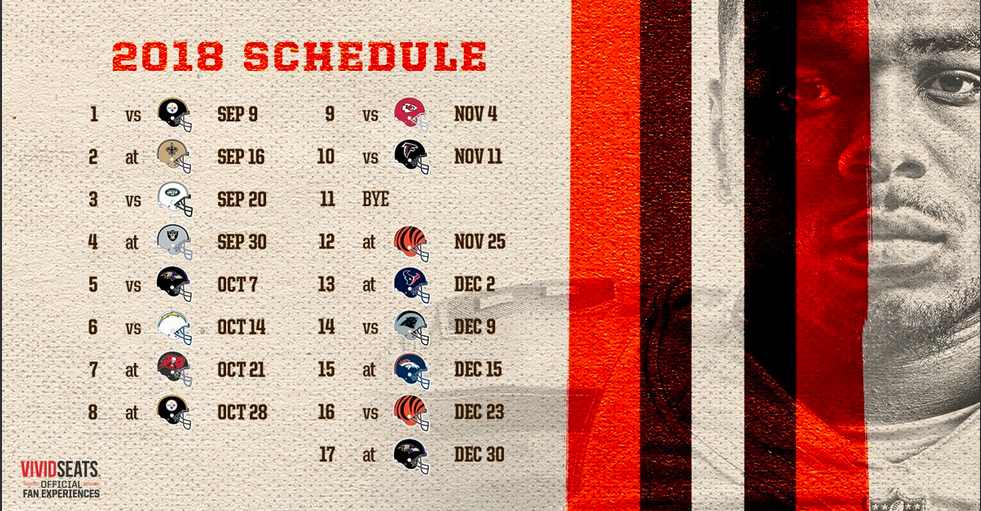 CLEVELAND – While the NFL offseason can grow stale during the months between the end of the Super Bowl and the NFL Draft, the league’s annual schedule release gives fans a sign that there is light at the end of the tunnel. As of Thursday night, all 32 fan bases know where and when to find their team playing football in 2018.

For the Cleveland Browns that 2018 slate begins with a home matchup against their vaunted division rival the Pittsburgh Steelers, for the second consecutive season.

Somewhat surprisingly after last year’s disastrous 0-16 season, Cleveland was awarded a Thursday Night home game as they welcome the Jets to First Energy Stadium on Sept. 27, to kickoff Week Three. It will be their first prime-time game since a Week 10 loss to the Ravens in 2016 and their last home prime time game since hosting the Ravens on Monday Night Football in 2015. That 33-27 loss is hard to forget, as Baltimore blocked a field goal in the closing seconds and watched Will Hill return it 64 yards for a walk-off touchdown.

That meeting with the Jets is the Browns lone prime-time contest of 2018. They do play two games in the late Sunday afternoon time slot, the first of which comes the very next week when they make a cross-country trek to Oakland on Sunday, Sept. 30. That game is slated for a 4:05 pm start time. The other comes much later in the season during a Week 15 stop in Denver, which gets underway at 4:30 pm.

The remaining 13 games will all kickoff at 1 pm.

Following their battle with the Raiders, Cleveland will enter a six-game stretch where they alternate two home games with two road games. They’ll stay inside the friendly confines of First Energy Stadium for meeting with the Ravens and Los Angeles Chargers in weeks five and six, then follow it up with road trips to Tampa Bay and Pittsburgh to wrap up the season series with the Steelers.

That stretch ends with home matchups against the defending AFC West Champion Kansas City Chiefs and the Super Bowl 51 runner-up Atlanta Falcons in weeks nine and 10.

Cleveland will enjoy their bye week in Week 11 and prep for four of their last six games to take place on the road. Off the bye, they will round out Thanksgiving weekend by heading south down I-71 to Cincinnati for round one of the battle of Ohio on Sunday, Nov. 25. The two division and state foes will meet again at First Energy Stadium in Week 16, before Cleveland travels to Baltimore on Dec. 30 to conclude the season. It’s the first time since 2014 that the franchise will meet the Ravens in it’s season finale.

The Browns schedule in considered the fifth easiest and includes matchups against five teams that made the playoffs in 2017. It also features just a single matchup against a team coming off a bye (Pittsburgh in Week Eight) and no matchups against teams that played a Thursday night game the week prior.

Additionally, Cleveland will be challenged by a handful of the league’s top quarterbacks. Outside of two annual meetings with Ben Roethlisberger – who owns a 22-2 record against the Browns over his illustrious career – they’ll face Super Bowl Champion Drew Brees, 2016 and 2017 MVPs Cam Newton and Matt Ryan, as well as franchise signal callers Phillip Rivers and Derek Carr.

Start planning your pre-game tailgates and road trips. Check out the full schedule for yourself:

Our 2018 schedule has arrived.

Despite hand injury, Love says he will be ready to play in Game 3
NEOSI’s Studs For 2018 NFL Draft