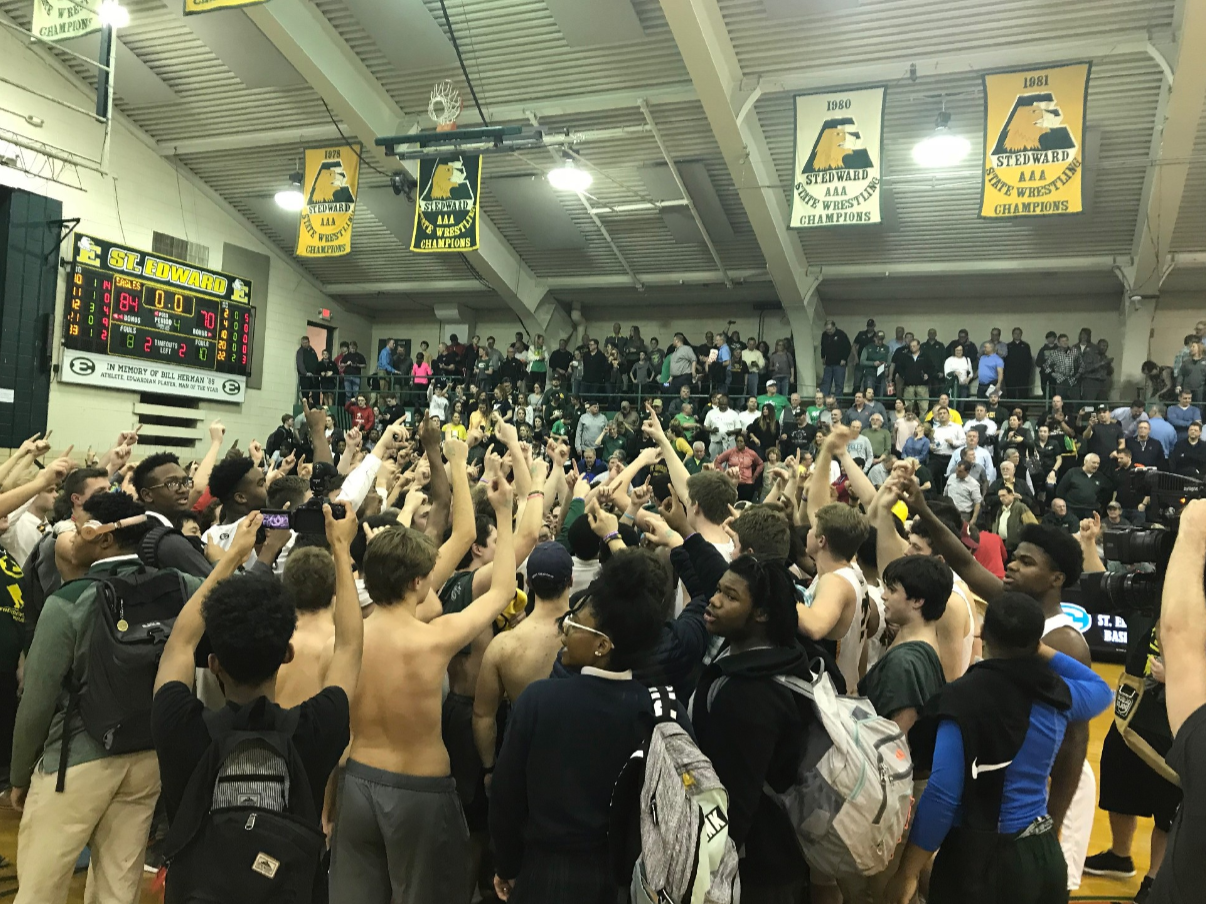 Lakewood, Ohio– With just about three minutes left in the game, the St. Ed’s team knew they were going to knock off the best team in the state of Ohio. Just minutes later, the St. Ed’s student section was celebrating on the court with their team.

A total team effort from the Eagles helped knock off the previously unbeaten Solon, 84-70, Tuesday night in Lakewood. The win now refines the record of St. Edwards to 18-3, while the loss brings the Solon Comets to a 20-1 record.

The message Coach Flannery sent to his team before the game was to be ready. He knew his team had the height advantage coming into the matchup, but Flannery told his team to play their normal basketball and to not really make any major adjustments against the guard-oriented Solon team. The message was received from the opening tip-off as the Eagles paced the game from beginning to end.

“One thing that we did stress though, which I think was a huge key was to just rebound the ball,” coach Flannery said. “I think we got a couple second and third opportunities because of our height and size.”

Senior Patrick Flannery guided the Eagles offense with 20 points. Grant Huffman followed that up with 16 points, along with Devontae Blanton’s 14 points. Junior Demetrius Terry rounded out the scoring with 11 points off the bench.

St. Eds got out to an early 22-15 lead after the first quarter. Comet junior Trent Williams found his touch early on in the second quarter to keep Solon within striking distance. But the sedulous defense from the Eagles helped force turnovers which led to easy buckets the other way.

Grant Huffman would drive to the basket as time was expiring to sink the two final points of the half. That score would end a 23 point second quarter for the Eagles. St. Eds would outscore Solon by seven points in the second quarter, which would ascended their lead to 14 points heading into halftime.

The Eagles held a lead that started from the opening tip-off. Coach Flannery knew his leads were never safe enough playing a very talented, sharp-shooting team like Solon. Building onto leads was paramount during the win Tuesday night.

“I was really just proud of our guys for every time they scored, we seemed to answer,” said coach Flannery. “I thought that was big tonight that we kept attacking. In games like this, you never feel comfortable because you know how good they are.”

Solon failed to get within single digits in the second half as the pressure defense from St. Eds was too much for the Comets. The lead would increase to 16 points after the third quarter for the Eagles and would remain in control for the remainder of the game.

Solon coach Tony DeCesare knew when he scheduled this game last season, that it would be a testament to the kind of team they are. Even though the end result isn’t what he and his players planned, he was very pleased with the effort his guys showed against a very competent St. Eds team.

“I like what our guys did. They never gave in and played hard,” coach DeCesare said. “They battled till the end. We just couldn’t get over the hump. It was fun to come here and it’s the kind of game that’s great for our program and for our team.”

Senior guard Sincere Carry would lead the Comets Tuesday night with 23 points. Junior Trent Williams racked up 22 points, followed by Mike Bekelja’s 15 points. These three would score 60 of the teams 70 points during the loss.

Losing is always tough for a team, especially losing your first game this late in the season. The learning experience coach DeCesare’s team takes from this game is what matters the most, especially with the playoffs right around the corner.”

“The best thing we can do though is to take a look at how Eds beat us tonight and then get better in those areas,” he said. “Win or lose, that’s what you want to take from a game, especially a game from a team as good as St. Eds.” 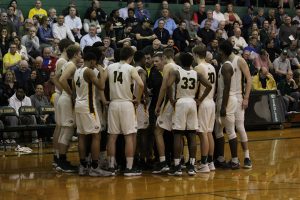