Spurs Great Tim Duncan Retiring; How Did He and LeBron James Matchup Over the Years? 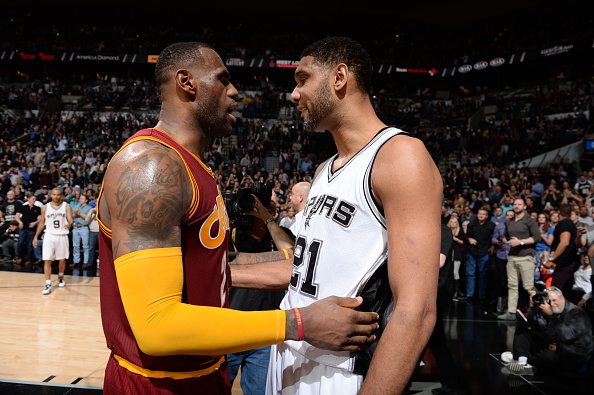 Most of Monday’s sports fans woke up to the somewhat surprising news that future Hall of Famer Tim Duncan is retiring after 19 memorable seasons with San Antonio.

San Antonio Spurs forward Tim Duncan today announced that he will retire after 19 seasons with the organization. Since drafting Duncan, the Spurs won five championships and posted a 1,072-438 regular season record, giving the team a .710 winning percentage, which is the best 19-year stretch in NBA history and was the best in all of the NBA, NFL, NHL and MLB over the last 19 years.

Originally selected by the Spurs as the first overall pick in the 1997 NBA Draft, Duncan helped San Antonio reach the playoffs in each of his 19 seasons and became the only player in league history to start and win a title in three different decades. The Silver and Black won at least 50 games the last 17 seasons, the longest streak in league history, and posted at least a .600 winning percentage in each of Duncan’s 19 seasons, an all-time record for most consecutive seasons with a .600 win percentage in the four major U.S. sports.

He also won five titles, meaning he’s still two up on Cavaliers forward LeBron James, who had some great battles over the years against Duncan, including a couple memorable matchups in the NBA Finals.

James’ Heat met the Spurs 16 times in the playoffs, with Duncan going 11-5 against LeBron’s teams, winning two titles to one in head to head matchups.

In those three NBA Finals, LeBron averaged more points per game than Duncan (25.4 to 17.6), but Duncan had a higher field goal percentage as well as more rebounds per game (11.3 to 8.9).

James always seemed to like playing Duncan, putting out a message back in January calling Duncan the greatest power forward that ever played the game.

Don't know how many times we got left to go against one another but I've never have and I never will take them for granted! The consistency you've shown over the years goes unmatched and as a competitor it's always a treat to be competing on the same floor as you! Being a professional(professionalism) is so overlooked in our sport but I always knew who I could look to if I ever wasn't professional about this lovely game and that's You. From one King to Another and to the Greatest PF to Ever play this game, all Love and Respect Timmy D!

As far as the regular season goes, LeBron and Duncan were even, as each won 10 games during the 19 year career of Duncan. LeBron put up 26.4 points per game in those meetings, while Duncan averaged 18.3 points per contest.

Here’s some memorable videos of Duncan and James over the years.

The first is just moments after the Spurs swept the Cavs in the 2007 NBA Finals in Cleveland.

Here’s Duncan blocking James in the NBA Finals in 2013, a series won by James and the Heat.

Joe Archino breaks down the storied legacy of the two all time greats.