SOT Game of the Week: Olmsted Falls pulls away in second half to win 55-28 over Brecksville. 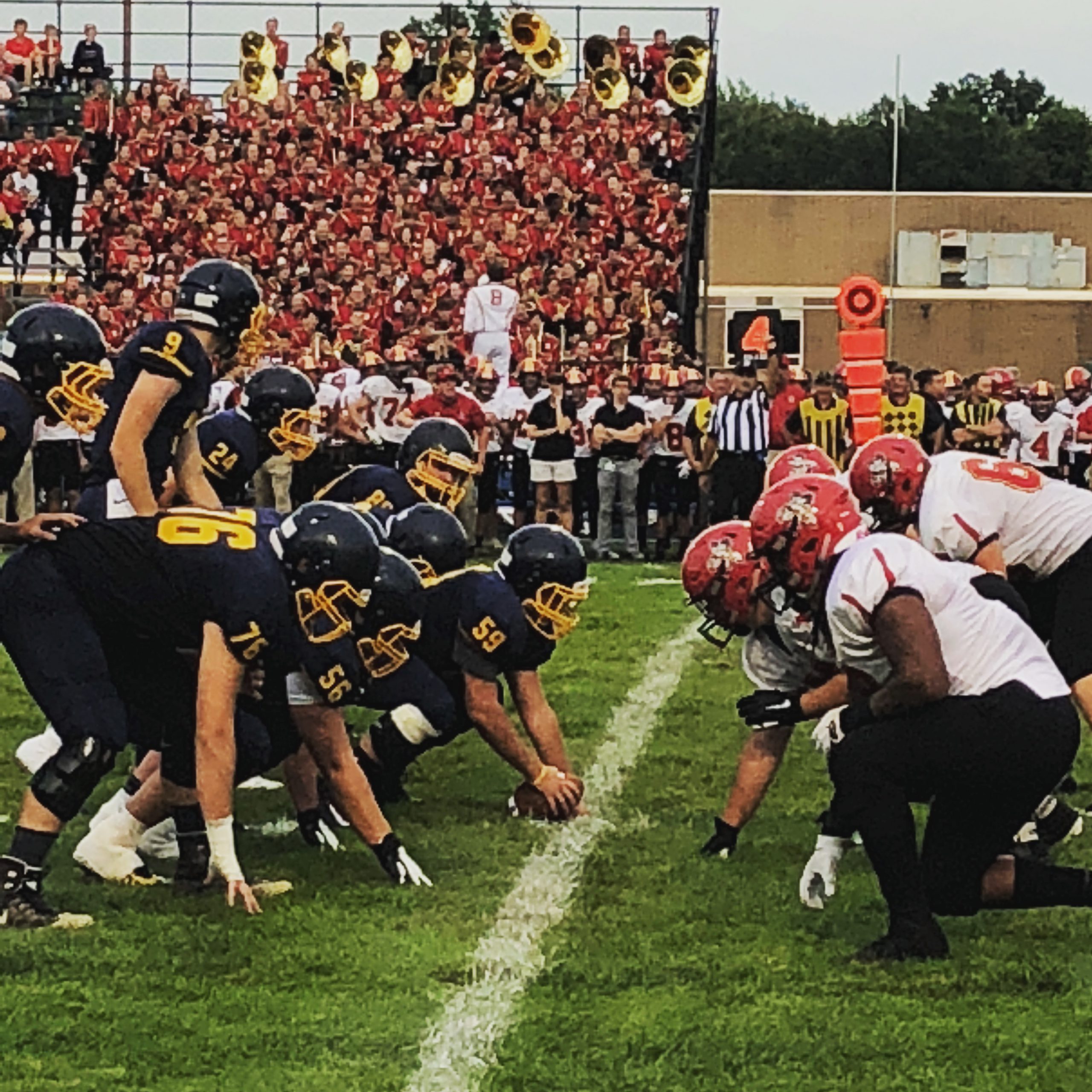 OLMSTED FALLS, OHIO–  The most wonderful time of year is upon us, Week 1 of high school football in Northeast Ohio.   Our game of the week is a match up of two teams very much riding a wave of buzz  and expectation for the 2018 campaign. The Brecksville-Broadview Heights Bees from the Suburban League National Division travelled to Olmsted Falls to take on the Bulldogs of the Southwestern Conference.

After forcing a Brecksville punt on the opening drive, the Bulldogs struck first. Senior quarterback Teddy Grendzynski scored on a 20-yard touchdown run, and the Bulldogs led 7-0 early in to the first quarter.

Olmsted Falls’ defense forced a fumble on the very next Brecksville play from scrimmage, and took over deep in Bee territory.  Grendzynski would find senior WR Braden Galaska for a 24-yard TD and the Bulldogs led 14-0 halfway through the first quarter.

Brecksville was finally able to get some rhythm offensively as they put together a 67-yard drive that was capped off with a 6-yard TD run from junior running back Christian Mitchell.  At the end of the first quarter the Bulldogs led 14-7.

Brecksville’s defense was able to stifle the bulldog offense on a fourth-and-1 to open the second quarter, giving the Bees great field position; however, the Bulldog defense immediately responded with an interception by Braden Galaska.

The Bees responded with a scoring drive of 75-yards, soph0more running back Garret Kubitz would score on a 1-yard TD run, narrowing Olmsted Falls’ lead to 21-14 with 4:59 left in the half.

The Brecksville defense was able to force a fumble on the next Bulldog offensive possession and Brecksville sophomore quarterback Joe Labas connected with junior wide receiver Ronald Wilson for a 24-yard touchdown pass and catch, and just like that, the game was tied 21-21 with 1:21 left in the half.

Touchdown @BBHFootball ! 21 yard pass from QB Joe Labas to WR Ronnie Wilson. We are tied at 21 with 1:21 left in the 2Q. @FOX8FNTD @ESPNCleveland @NEOSportsInside pic.twitter.com/u7OjUFS6w5

Olmsted Falls capitalized on an excellent kick-off return and marched 49 yardss down the field and a 2-yard TD run by Spellacy, his second on the night, gave the Bulldogs a 28-21 lead at half time.

Olmsted Falls dominated the third quarter on both sides of the ball.  Offensively, the Bulldogs would have two drives of 80-yards to tack on two more TDs, Each ran in by Grendzynski, giving him three scores on the night.  Defensively the Bulldogs were smothering the Bees, creating negative plays, limiting yards after catches, and notching a big sack on fourth down to end the quarter. The Olmsted Falls lead stood at 41-21 heading into the fourth.

The Bulldogs continued to score at will, this time Grendzynski found Howard for a 3-yard touchdown pass to give Olmsted Falls a 48-21 lead in the fourth.

The Bees fall to 0-1 on the season as they will look to rebound in Week 2 as they will host Garfield Heights.  Olmsted Falls was led by Senior QB and player of game Teddy Grendzynski with five total touchdowns, three rushing and two passing on the night.  The Bulldogs improve to 1-0 on the season and will go on the road in Week 2 to face Avon as they open up Southwestern Conference play.

HS Girls Soccer: Olmsted Falls Knocks Off Westlake 5-0
Royals walk it off against the Indians; three takeaways from the 5-4 loss