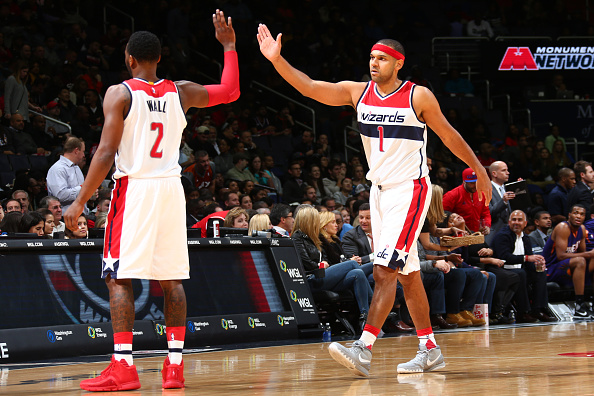 ProBasketballTalk.com reports that the Cavs may have interest in looking at Wizards swingman Jared Dudley, a player according to ESPN’s Brian Windhorst the Cavs have been chatting and looking at for quite awhile.

Here’s part of the story from the site about the Cavs and Dudley:

With the Warriors hoarding so many of the NBA’s few good wings – Klay Thompson, Harrison Barnes and Andre Iguodala – and using them simultaneously with Draymond Green and Stephen Curry in their nuclear lineup, the rest of the league is trying to catch up.

The Cavs have a decent start with LeBron James, Iman Shumpert and J.R. Smith, but they could use more depth. When the goal is a championship, it’s better to leave nothing to chance.

The 30-year-old is in his 10th NBA season, he was drafted by Charlotte in the first round in the 2007 season. He played a season and a half with the Bobocats, then went to Phoenix where he played five seasons. Since then he’s played for the Clippers, Bucks and now he’s with Washington.

Cavs Collapse in Charlotte, Fall 106-97 to Hornets
VIDEO: J.R. Smith Responds to Not Being Selected for 3-Point Contest; “I’m going to take the Marshawn Lynch Approach”