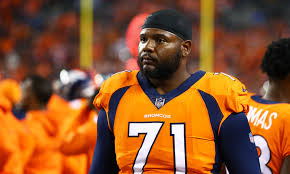 Stephenson was signed in the off-season by Cleveland to a one-year, $2.5 million dollar deal. He spent time with Kansas City and Denver in six NFL seasons.

The veteran lineman leaves the game after facing a two-game suspension for the league’s substance abuse policy. He also missed all of the summer practices the Browns held this year.

The Browns Sweeping the Steelers in 2018? One Former Player on NFL Network Thinks So
Five Players to Watch for the Browns in 2018