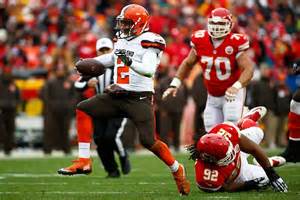 ESPN NFL reporter, Ed Werder sent out the following tweet after the Browns issued a statement that seemed to hint they are going to cut Johnny Manziel at the first opportunity, which could be March 9.

Johnny Manziel has told people #Cowboys, #Rams, #Chiefs interested in him. Rams had draft interest, Chiefs have none. Thoughts, Jerry?

It would be interesting to know exactly who Manziel told this to and Werder appears to be saying the Chiefs would not be interested, but all three of those teams would make sense to at least be in the market for a backup quarterback.

The Rams and Cowboys seem the most likely if any team at all would take a chance on Manziel. Imagine “Johnny Hollywood.” The new face of the new franchise, the Los Angeles Rams.

He could go to a different nightclub for six months straight, party with A-list celebrities, live the “Entourage” lifestyle, and TMZ wouldn’t have to go as far to track his every move.

We all know about Jerry Jones’ antics and how beloved Manziel is in his home state. Tony Romo can’t stay healthy, and Troy Aikman recently said he believes the Cowboys will either go after Robert Griffin III or Manziel this offseason.

What seems inevitable is Manziel will not be wearing Brown and Orange in the near future.

The mystery lies in which team, if any will take a chance on him.

We are just over 35 days away from March 9th, the earliest date the Browns could waive Manziel. But who’s counting?