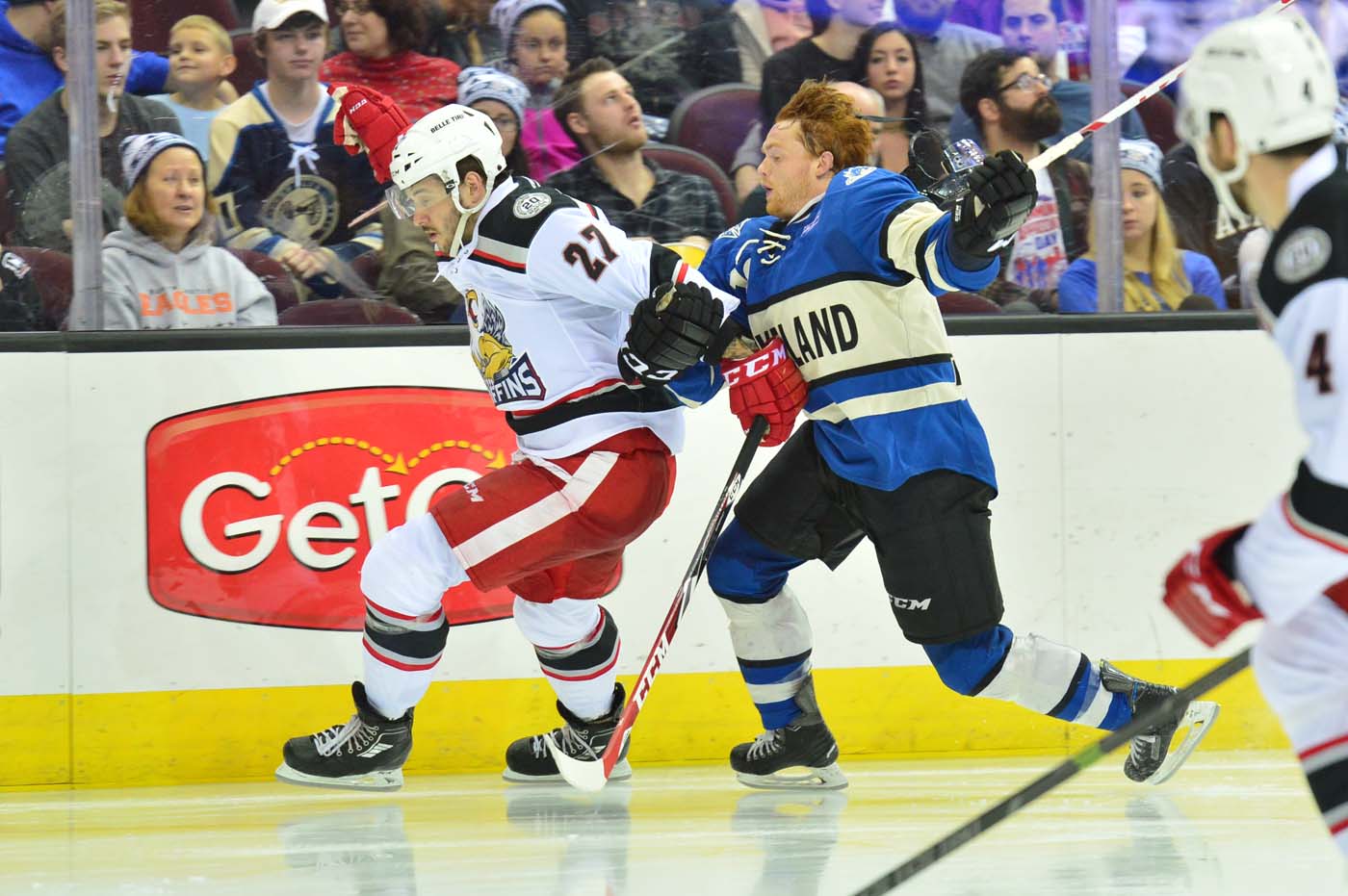 The Monsters were the last team to defeat them but the makings of that happening again were in doubt from the start. The Griffins came shooting out of the gate, with a goal from C Andy Miele just 21 seconds into the game.

The Monsters were able to march right back with a big goal from RW Oliver Bjorkstrand, his third of the season just minutes later. The tie game was once again not long lived as the Griffins regained the lead off the stick of RW Colin Campbell who deflected a shot from one of the defensemen in front of a crowded Monsters net.

Both teams had several other opportunities in the exciting first period. The Monsters best chance was a 4-1 breakaway which ended up in the shot being deflected up and out of play for a faceoff.

Grand Rapids was able to capitalize on one last opportunity towards the end of the period, when Campbell scored his second goal of the night going top shelf on G Anton Forsberg who only averages 2.5 goals against in his 17 games on the season.

The 2nd period lived right up to the same hype as the first period. The Griffins tried to match their mark from the first but fell a little short scoring just 33 seconds into the period on what should have been an easy save to bring the lead to 4-1. Goalie Forsberg was subsequently removed from goal after allowing four goals on just nine shots.

The Monsters got a fortunate break a few minutes later when a Griffins defender pushed the puck out of their own crease and a penalty shot was awarded. New addition Joe Devin made good on the opportunity, and put the Monsters behind 4-2 with his first goal in just his second game for Lake Erie.

The Monsters played much more aggressive in the second period, with them having several more opportunities after that goal with man advantages in transition but could not score on any of their shots.

The game took a sour turn with 11:33 left in the 2nd after Monsters D John Ramage gave a check to the head of a Griffins player into the boards. A scuffle ensued and Ramage was given a five minute major and was ejected from the game.

The game got chippy after that penalty with both teams seeming to scuffle after every whistle and cheap shots were thrown. The Monsters penalty from Ramage got evened out after the Griffins goalie Jared Coreau threw a cheap shot to the back of the head of one of the Monsters players while he was down on the ice. Things seemed to even out after that and the Monsters continued to have several good opportunities.

It was the Griffins that actually struck next with under two minutes left in the period when they scored again by Eric Tangradi to put them up 5-2. In the fashion with how this game has gone, the Monsters came right back down and scored behind LW Kerby Rychel to make it 5-3 after the 2nd. His goal was later reversed to Josh Anderson, who is now tied with Daniel Zaar for most goals on the team with eight.

Lake Erie was the team that had its chances to come out strong in the third. About three minutes in, the Monsters player had one man to beat but was hooked from behind for a penalty. No penalty shot was awarded and the Monsters failed to score on that power play and the one they got right after.

Right around the halfway mark, the Griffins put the nail in the coffin with a one-on-one goal off a sloppy Monsters turnover. Under two minutes later, Grand Rapids found the back of the net for a seventh time after a simple unblocked wrister from the wing went in by Campbell.

That gave him a hat trick for the game and he matches his season total of three goals in 25 games tonight. Lake Erie looked defeated after that and failed to muster anything for the remainder of the game.

After the game, Coach Jared Bednar seemed disappointed in the play from his team of late. He still feels confident in his goalkeepers despite allowing seven goals on just twenty shots tonight.

He blamed most of that on man advantages and cheating that led to perfect opportunities to score for the Griffins. Let’s see if the Monsters can rebound from the loss tonight in which they allowed a season high seven goals.

Forsberg will be back in net tomorrow as the Monsters have another chance to end the Griffins 15 game win streak at 5 PM tomorrow at the Q.