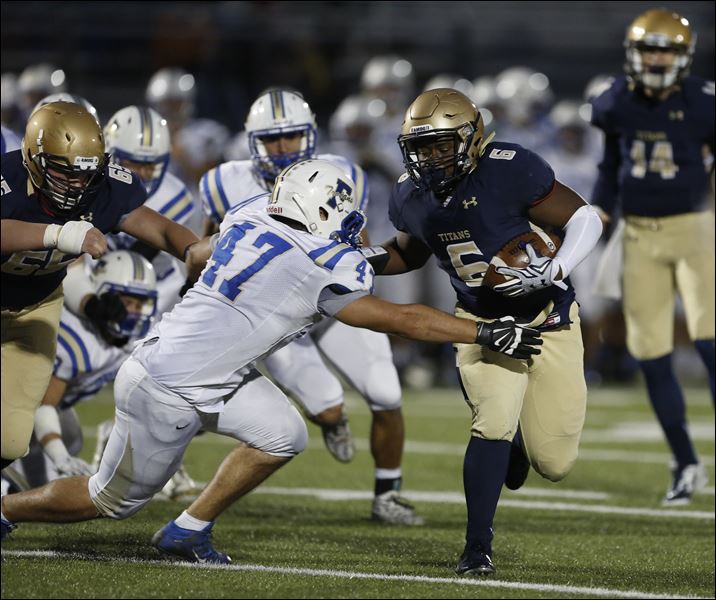 St John Jesuit is coached by Larry McDaniel who is in his first year at the helm and has guided his Titans to a playoff berth.

McDaniel brings 20 years of college coaching experience with him, most recently as assistant coach at the University of Toledo.

The St John offense is led by Freshman QB Brady Litchenberg who last week went 18/26, 154 yards and 2 TD, in a huge win over Toledo Central Catholic which propelled the Titans to the playoffs.

Litchenberg and RB Christopher Valentine handle the bulk of the Titan run game, while WR Dimitrios Mitsopoulos and WR Dallas Gant along with Valentine provide Litchenberg with outside weapons.

The St John defense is led by University of Minnesota recruit DL Austin Beier who leads a very stout and ball hawking defense who is adept at creating turnovers.

Their linebacking core is led by Christian Trudell, who leads a consistently good run stopping unit.

It is the time of the year when you through all the records out. It’s a new season, whether St. John can overcome a lack of experience, especially come playoff time, remains to be seen. The games are played on the field, not on paper.

Avon will have to adjust to unfamiliarity and if the Titans can avoid early mistakes and turnovers, this could be better than advertised.

PREVIEW: Cavaliers look to avoid three-game losing streak tonight against Knicks
Cast Your Vote For The Week 10 NEOSI Player Of The Week