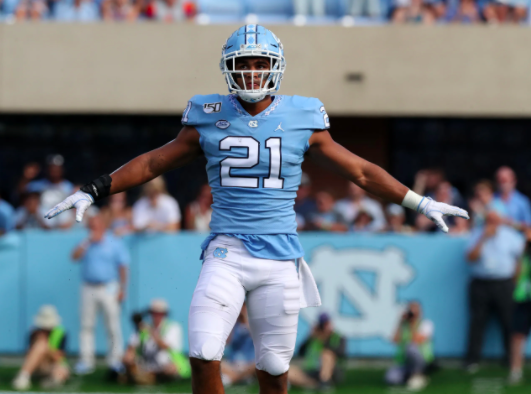 As a former childhood chess prodigy and star college quarterback, Surratt approaches the game with great competitive energy and a high-level football mind. Even though he’s only played linebacker for two seasons, Surratt has natural instincts that serve him well when blitzing or dropping into zone coverage. He’s a plus run defender who shows plenty of willingness to engage with linemen. While he gets stuck on some blocks, he has the ability to shed running backs and tight ends and he even makes some tackles while he’s actively being blocked. It’s easy to see why Surratt has been the leading tackler on the team the last two years as well; he rarely misses tackles, even in the open field. What makes him so intriguing for the Browns is that he operates well as a spy defender and he was able to neutralize one of the most dangerous mobile QBs in college football this year in D’Eriq King from the University of Miami, which means he could be a crucial piece of the defense against Lamar Jackson and the Ravens.

The Browns’ heartbreaking loss to the Chiefs exposed the lack of speed the Browns had left in their wide receiver room. Adding D’Wayne Eskridge would give them someone who is a threat to score anytime he touches the ball with plenty of game-breaking speed that can be used to take the top off the defense. At first, he’ll probably be used as a developmental receiver and a core special teamer as a dynamic kick returner. Eskridge plays with a chip on his shoulder, which he shows by never wasting a rep and constantly searching for contact. He plays like his hair is on fire, always trying to get open down the field or by relentlessly blocking the nearest defender completely out of the play. Eskridge might be small, but he plays with what looks like 4.3 speed and incredible acceleration that allows him to make violent cuts on routes making him essentially unguardable on comebacks, curls and in-breaking routes if the defense respects his ability as a deep threat. He’s also a strong, natural hands catcher who only struggles with drops if he lets the ball get too deep in his pads.

With Olivier Vernon tearing his Achilles, the Browns are likely going to look to add edge talent through the draft and/or free agency this offseason. Patrick Jones II is someone who will be an option for the Browns in the first round, but he is really better suited to be an early day two selection. Jones has great get-off and at times will make a real flash play where he is in the backfield seemingly before anyone else moves. He is rather limited in his pass rush moves, so he’s going to need a lot of coaching to reach his ceiling. However, he has a great bull rush and he can win with brute stretch against some tackles, but he can also get stonewalled by bigger or longer-armed lineman and struggles to break through double teams of any kind. He fits the mold of power rushing EDGE players that the Browns seem to like though and his game looks similar to a young Olivier Vernon at times. While he might not be the top option on the board at the end of the first round, he’s definitely a player the Browns will do their homework on, so it’s worth monitoring his progress leading up to the draft.

It would be no surprise to Browns fans to see the team acquire multiple defensive backs during the offseason. Deablo could be an interesting player to add to the back end of the defense due to his versatility and toughness. Beyond passing the eye test of being an NFL player, Deablo looks good in zone coverage, shows the ability to play in the box or in single high and he’s not afraid to lay the wood on receivers working across the middle of the field. He is actually a similar player to Browns DB Karl Joseph. There are some glaring deficiencies in his game, though, which is why he’s a day-three prospect. Even though he’s constantly around the football, he leaves a lot to be desired. He almost looks too slow reading the offense at times and it kind of looks like a lack of effort on tape because he plays almost flat-footed some plays. However, Deablo is exactly the player teams would want to target on day three because he has a tremendous amount of upside, but he has a long way to go to becoming an NFL starting-caliber player.

Browns Stars Named in All-NFL Team of the Season
Deshaun Watson, Baker Mayfield and What’s Next