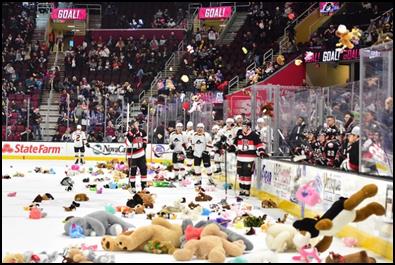 The Cleveland Monsters defeated the Belleville Senators on Saturday night in front of 9,079 fans at The Q by a final score of 3-2.

With the win, the Monsters improve to 16-10-4-0 overall this season and with 36 points, are currently tied for second place with the Syracuse Crunch in the AHL’s North Division standings.

Cleveland jumped in front 1-0 when Sam Vigneault took advantage of a loose puck that caromed off the boards, potting home an even-strength goal with feeds from Nathan Gerbe and Gabriel Carlsson to send teddy bears flying onto the ice at 19:42 of the opening frame.

After a scoreless middle period, the Senators evened the score, 1-1, at 4:25 of the final frame thanks to a power-play tally from Jack Rodewald. Momentum was short-lived for Belleville, however, as Gerbe pushed the Monsters back in front, 2-1, courtesy of a five-on-three power-play goal at 6:22 with assists from Alex Broadhurst and Adam Clendening.

Cleveland struck again at 12:21 when Vitaly Abramov netted a power-play goal on set-ups from Clendening and Mark Letestu, to give the Monsters a 3-1 lead.

Belleville’s Aaron Luchuk capped the scoring for the evening, netting an even-strength marker at 18:42 of the third period, to secure a 3-2 for the Monsters.

Monsters goaltender Matiss Kivlenieks stopped 27 of the 29 shots he faced to improve to 3-1-1 on the season, while Senators netminder Filip Gustavsson stopped 34 of 37 shots faced to drop to 7-10-1 on the year.

Next up for the Monsters, it’s a Wednesday home matchup versus the Rochester Americans with full coverage, live from The Q, underway at 7:00 pm.