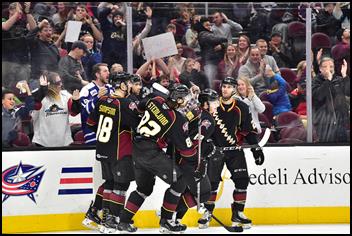 The Cleveland Monsters defeated the Toronto Marlies, 6-5, in a shootout on Wednesday night at The Q. With the win, the Monsters improve to 20-16-4-1 overall this season and with 45 points, move to a fifth place tie in the AHL’s North Division standings with the Laval Rocket.

The Marlies got the scoring started, getting two quick goals in the opening frame from Carl Grundstrom at 4:18 and Jeremy Bracco at 6:34 to give Toronto a quick 2-0 lead. The Monsters answered back at 17:10 when defenseman Doyle Somerby poked home his fourth goal of the season, an even-strength marker with feeds from Paul Bittner and Sam Vigneault to trim the Marlies lead to 2-1.

Toronto struck for two more tallies in the middle frame, receiving even-strength goals from Adam Brooks at 2:57 and Richard Clune at 7:06, to extend the Marlies lead to 4-1.

Bittner lit the lamp for Cleveland with a five-on-five finish at 11:22 thanks to assists from Vigneault and Vitaly Abramov to cut into Toronto’s lead, 4-2.

The Monsters closed the gap once more at 12:31 of the second period when the puck caromed off Mark Letestu’s left elbow and into the net for an even-strength tally. Ryan Collins and Dan DeSalvo picked up the assists as the Monsters trimmed the Marlies lead to 4-3 heading into the second intermission.

In the final period, the Monsters evened things up with Toronto, 4-4, as Kole Sherwood notched his sixth goal of the season, an even-strength strike at 7:12 courtesy of feeds from Vigneault and Ryan MacInnis.

Cleveland claimed their first lead of the night at 11:41 when Eric Robinson netted an even-strength goal from Dillon Simpson to give the Monsters a 5-4 edge.

Toronto tied things up once again, 5-5, when Sam Gagner scored on the power-play at 17:44. After a scoreless extra frame, Letestu netted the game-winner in the shootout to cap off a Monsters home win, 6-5.

Next up for the Monsters, it’s a Thursday home matchup versus the Chicago Wolves with full coverage, live from The Q, underway at 7:00 pm.