Monsters Fall to Wolves in Rosemont 3-1 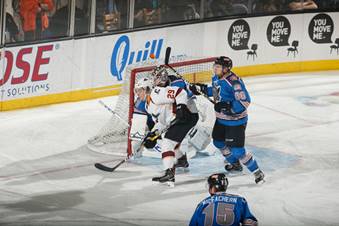 The Cleveland Monsters were defeated by the Chicago Wolves on Sunday at AllState Arena in Rosemont, IL by a final score of 3-1. With the loss, the Monsters fall to 12-21-3-3 overall this season, and with a .395 points percentage, remain alone in seventh place of the AHL’s Central Division standings.

After a scoreless first period, it was Justin Scott who opened the scoring for the Monsters by delivering an even-strength goal at 2:33 of the second period, set up by Terry Broadhurst to push Cleveland in front, 1-0.

The third period saw the Wolves respond with three unanswered goals by Jake Bischoff at 8:25, Tomas Hyka at 15:25, and an empty net tally by Wade Megan at 19:00 to cap the scoring for the evening.

Monsters goaltender Matiss Kivlenieks fell to 6-12-2 in net this season despite stopping 23 of the 25 pucks he faced while Wolves backstop Kasimir Kaskisuo improved to 8-10-2 this year by virtue of a 25-save performance.

Next up for the Monsters, it’s a Tuesday road clash vs. the Milwaukee Admirals with full coverage, live from UW-Milwaukee Panther Arena in Milwaukee, WI, underway at 8:00 pm.