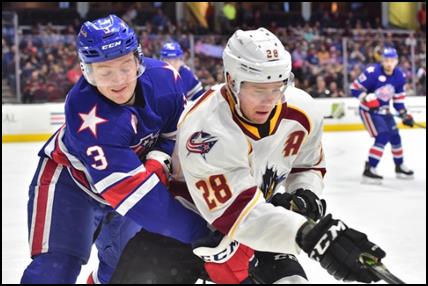 The Cleveland Monsters were defeated by the Rochester Americans on Saturday night at The Q by a final score of 2-1 in overtime.

With the loss, the Monsters drop to 13-10-4-0 overall this season and with 30 points, are currently tied for third place with the Utica Comets in the AHL’s North Division standings.

After a scoreless opening frame, the Americans struck first when Brendan Guhle netted a power-play goal at 17:12 of the second period to give Rochester a 1-0 lead.

In the third period, Monsters captain Nathan Gerbe tallied a power-play goal at 16:49 on feeds from Adam Clendening and Zac Dalpe to tie the game, 1-1. C.J. Smith scored at 3:32 in overtime to secure a 2-1 win for Rochester.

Monsters goaltender Matiss Kivlenieks stopped 37 of the 38 shots he faced, while Jean Francois Berube dropped to 9-8-3 on the season after stopping three of the four pucks he faced. Rochester backstop Adam Wilcox stopped 30 of 31 shots faced to improve to 7-2-0 on the year.

Next up for the Monsters, it’s a Wednesday road matchup versus the Grand Rapids Griffins.