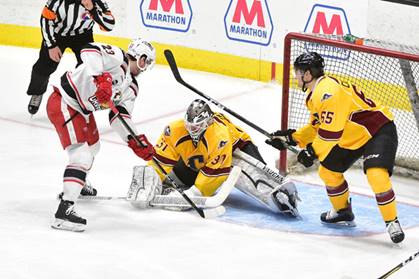 The Cleveland Monsters were defeated by the Grand Rapids Griffins on Sunday at The Q by a final score of 6-3. With the loss, the Monsters fell to 14-24-4-3 overall this season and with a .389 points percentage, remain alone in seventh place in the AHL’s Central Division standings.

Grand Rapids grabbed a 1-0 lead when Robbie Russo posted an even-strength marker at 6:16 of the opening period before Cleveland’s Zac Dalpe leveled the score at one with a power-play strike, assisted by Carter Camper and Nathan Gerbe at 16:19 of the first. Camper’s assist was the 300th point of his distinguished AHL career.

In the middle stanza, the Griffins posted back-to-back even-strength goals, from Turner Elson at 4:47 and Eric Tangradi at 7:10 respectively, to claim a 3-1 edge before the Monsters drew within a goal following a Tyler Motte power-play marker at 9:44, thanks to assists from Jordan Schroeder and Sam Vigneault. The Griffins hit back with two more unanswered strikes at five-on-five to claim a 5-2 lead through two periods courtesy of a Matt Puempel finish at 12:08 and a Ben Street score at 14:37.

In the third, Blake Siebenaler connected for Cleveland at 6:06 thanks to even-strength assists from Cameron Gaunce and Camper, but the Griffins capped a 6-3 win with an extra-man Tangradi goal at 15:49 of the final frame. Monsters net-minder Jeff Zatkoff fell to 1-2-1 in net this season despite making 19 saves on 25 shots faced while Grand Rapids’ goaltender Jared Coreau improved to 17-10-3 by virtue of a 25-save performance.

Next up for the Monsters, it’s a Friday home clash vs. the Manitoba Moose with full coverage, live from The Q, underway at 7:00.