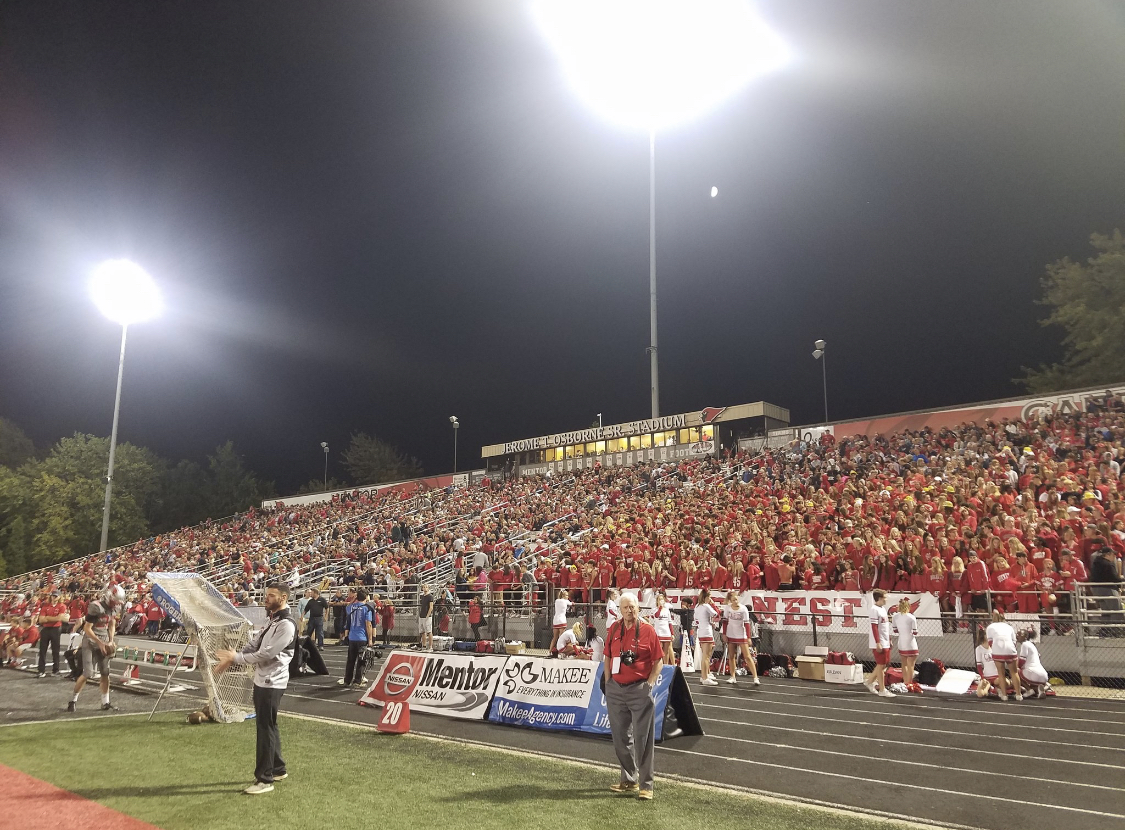 A standing room only crowd at Jerome T. Osborne Sr. Stadium in Mentor saw a game for the ages.

The atmosphere in Mentor was electric from the start. Former Cleveland Browns, Bernie Kosar, Kevin Mack, Hanford ”Big Dog” Dixon, Eric Metcalf, and Jim Brown were on hand to watch this instant classic.

Both teams had issues moving the ball the first drive and then Ian Kipp the junior signal caller for Mentor made the first mistake of the game.

Kipp while backed up threw a ball while being hit and the ball fell in the hands of senior defensive back Charlie Kinzel at the Mentor 41-yard line.

A couple of plays later St. Ignatius Senior quarterback Griffin Hanna mishandled the snap from center and fumbled into end zone where luckily for Ignatius, senior left tackle Nick Schwitzgebel fell on the ball in the end zone for a Wildcats touchdown.

The extra point was blocked and Ignatius took a 6-0 lead with 5:06 left in 1st quarter.

Mentor hit right back starting from their own 20 Kipp ran for 70 yards down the right side to the Ignatius 10-yard line.

Mentor senior running back Brian Trobel took care of the rest on 2 runs of 8 yards then 2 yards to finish off the 3 play drive that lasted 47 seconds.

The extra point was good and Mentor took a 7-6 lead. But that lead lasted exactly 15 seconds, as senior kick returner Connor Cmiel returned the kickoff 84 yards to paydirt and Ignatius went back on top after the extra point 13-7.

Mentor got back on the board with 2:25 left in the first as Trobel rumbled for 16 yards to put Mentor back up 14-13 to end the 1st quarter.

Mentor got the ball back to start the 2nd quarter and got a Field goal from Sophomore Andrew Smith from 33 yards out to make the game 17-13 Mentor.

Ignatius struck again with a 2-yard touchdown run from Griffin Ranna and the Wildcats took the lead 21-17 going into halftime.

Maybe the biggest break of the game was the third quarter kickoff, Cmiel took the opening 2nd half kickoff and sprinted to his left up the Ignatius sideline to the endzone.

However a flag was thrown which backed Ignatius up to about their 30-yard line. Ignatius got down to the Mentor 2-yard line but the drive stalled and Junior place kicker Declan Mangan drove a ball through the middle of the uprights to extend the Ignatius lead to 24-17.

On the next possession for Mentor they drove down to the 32 yard line. Mentor’s drive stalled so they bought out Andrew S3mith who had a 39-yard field goal try blocked, Cmiel picked the ball and raced 90 yards for the Ignatius touchdown.

Andrew Smith booted the extra point which at the time gave Ignatius a 31-17 lead.

The fourth quarter had fire works 28 seconds in as Brian Trobel capped off a drive from 1 yard touchdown run.

The 4th quarter was all Mentor as Trobel scored from 1 and 5-yard touchdown plunges to tie the ball game at 31 all.

The Cardinals got the last score of the night with about 5:29 left in the game Kipp had a run pass option and he seen a little sliver of light and snuck in.

Mentor (2-0) takes on Clarkson out of Canada next week. St Ignatius (1-) next plays the 4 time defending state champs Akron Hoban.