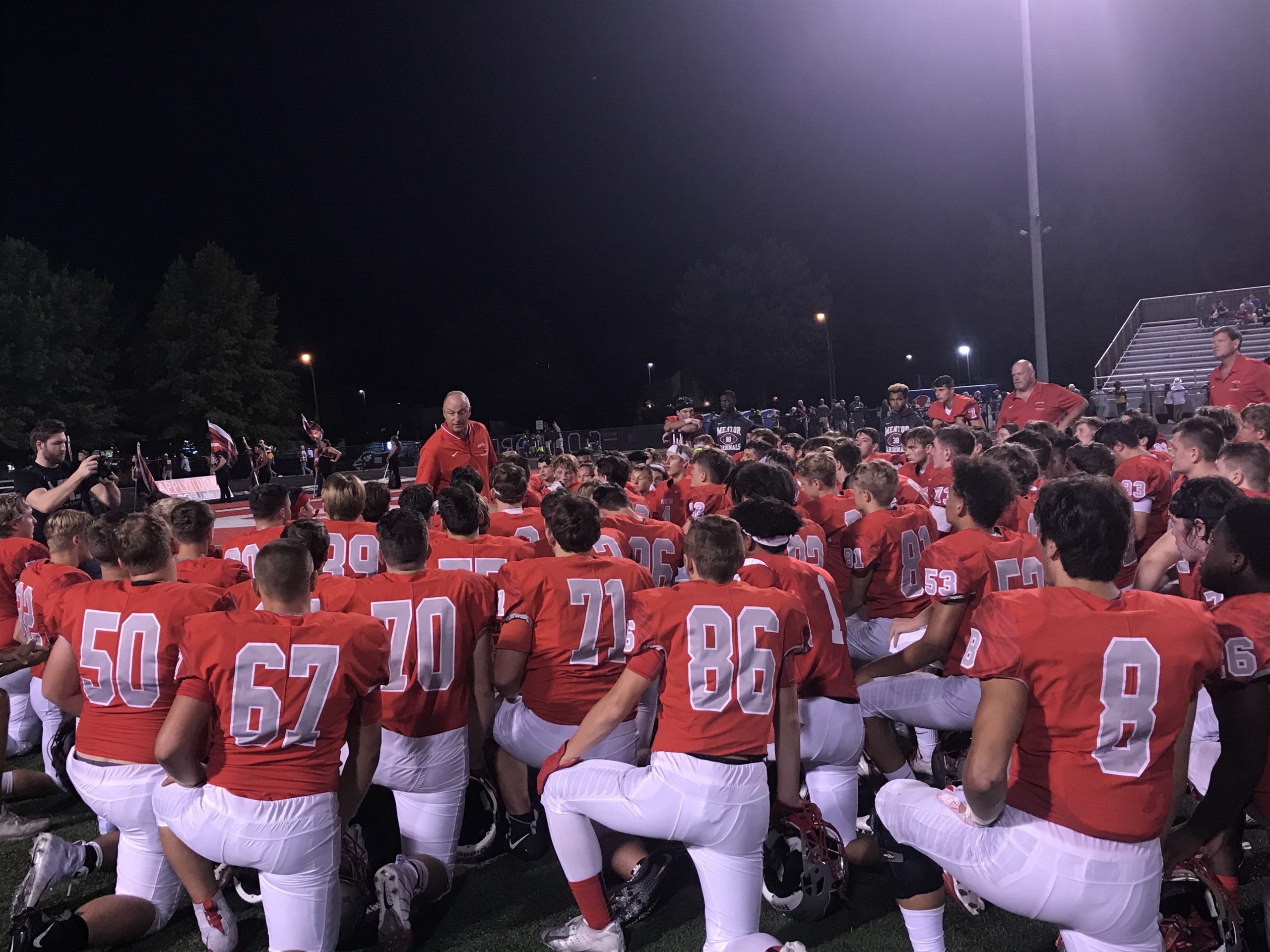 This game report is Brought to you by Nurenberg Paris and Mad Mac’s in Lakewood . Check them out today!

MENTOR, OHIO– It was the Mentor Cardinals who ended the Eagles’ season a year ago after defeating them in the regional semifinal 21-13. Friday night, the Eagles had an opportunity to seek revenge but sophomore quarterback Ian Kipp would spoil the season opener for St. Eds as Mentor went on to win 42-39.

What would usually end up in an up-and-down season opener for any other quarterback, Kipp thrived in his first career start for Mentor. How would he play against one of the best defenses in Northeast Ohio?

Well, the 15-year-old completed 14 of 18 passes for 114 yards. Not only a threat with his arm but the sophomore did most of his damage on the ground. He had 19 carries that went for 194 yards and two touchdowns Friday night.

Entering the game Friday night, Kipp had all the confidence in the world that he’ll show out against St. Ed’s.

“I always think the highest of myself,” Kipp said. “I always want to aim for the stars.”

The Cardinals wasted no time answering back. Kipp, the Sophomore quarterback, drove the Cardinals down the length of the field as the first quarter was winding down, ultimately ending with a 3-yard touchdown run from Kipp.

Both teams picked up right where they left off for the start of the second quarter. St. Ed’s regained the lead following a Jordan Castleberry 1-yard touchdown run.

Minutes later, Mentor tied the game up at 14 apiece after a 12-yard touchdown run by Brian Trobel and that would be the score at halftime.

The halftime break seemed to work in the favor of the Cardinals. In less than two minutes, Mentor took their first lead of the game after Trobel found the end zone for the second time.

The Cardinals headed into the final quarter leading the Eagles by a score of 21-14.

From there, both offenses came alive, scoring a combined 46 points in the fourth quarter.

With Mentor leading St. Ed’s 35-33 with just over three minutes left in the game and facing a third down and long, Kipp found Trobel on a 39-yard pass play, resulting in a first down and eventually setting up for the final points of the night from Mentor.

Throughout the night, Mentor capitalized on third downs quite a bit. In fact, Mentor converted on 9 of 13 third downs, something that helped them score touchdowns later on in their drives.

St. Ed’s quarterback Dzuro connected with his go-to target Kent seven times during the loss for 135 yards and two touchdowns.

Dzuro finished the game completing 18 of 24 passes for 276 yards and three touchdowns.

Mentor really started to control the game in the second half. Most of their damage came on the ground all night, registering 386 yards rushing to just 114 yards through the air.

“It’s a big win,” coach Steve Trivisonno said. “It was hard fought and those were two heavyweights playing. We’ll take that win.”

The junior had himself a career-game Friday night. He ran the ball a team-high 24 times for 192 yards and four touchdowns. He also caught two passes for 33 yards during the win. The junior is a very crafty and elusive running back who is hard to catch once he gets some open space.

“The young guy handled pressure really well tonight,” Trivisonno said about Trobel’s performance. “I was really proud of him.”