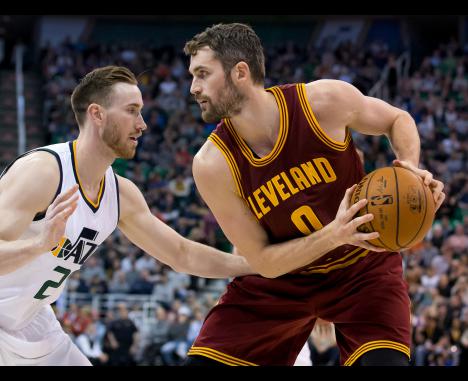 CLEVELAND— In the Cavs’ 91-83 win over the Utah Jazz, they got the welcome return of Kevin Love earlier than expected.

It was Love’s first game back with the team since February 11, due to arthroscopic surgery on his left knee. Love’s original timetable for return was six weeks, so he wasn’t expected back until the end of the month..

In 20 minutes of action, Love contributed 10 points and grabbed nine boards. But perhaps the most important thing was for him to get back out onto the court into game situations.

“When you get that first rebound, first bucket, I air-balled a three,” Love joked. “Little things like that, just knock the rust off. I was jawing with [head coach] Ty [Lue] a little bit, and I knew my minute restrictions right away.”

Kevin Love on what it felt like to "knock the rust off" @NEOSportsInside pic.twitter.com/DbBaNW4ZAp

While Love was far from playing perfect after missing the last month of action, it was clear he got a boost from LeBron James, who assisted on a majority of his baskets. James led all scorers with 33 points, 17 of which game in the fourth quarter. He also grabbed 10 rebounds and had six assists.

But despite Love’s return and James’ stellar play that buoyed his team in the final twelve minutes, it wasn’t all good news for the Cavs.

Both Kyrie Irving and Iman Shumpert left the game early. Irving experienced tightness in his left knee, while Shumpert sprained his left shoulder going up for an attempted dunk.

After the game, Lue said that that Shumpert and Irving are both “fine.” Irving will likely be okay to play in the next game, while Shumpert remains day-to-day.

The Cavs are back in action Saturday against the Clippers in Los Angeles.