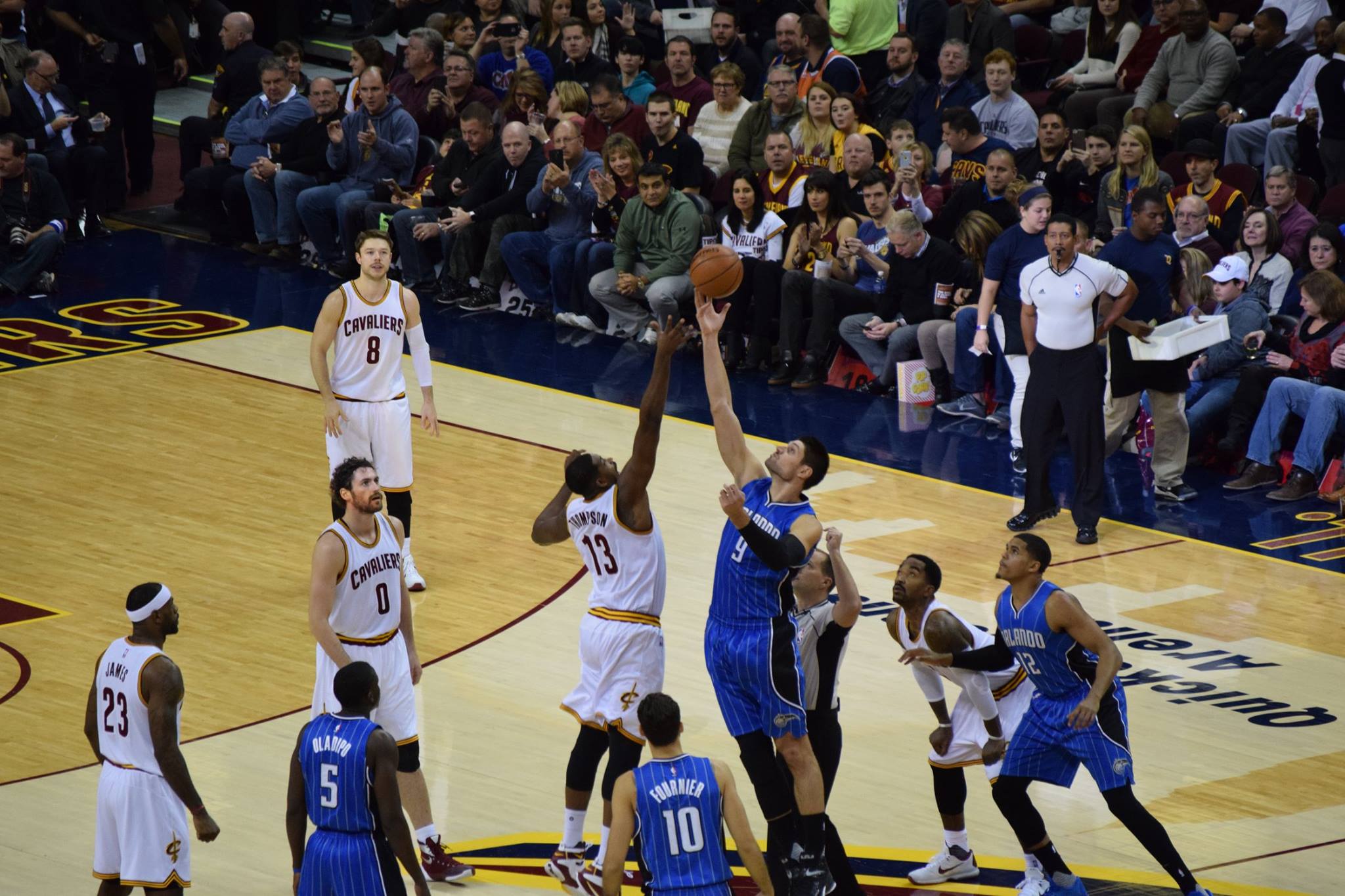 CLEVELAND – The Cavs hosted the Orlando Magic Monday night and after a close first half, put their foot on the gas pedal in the second half and cruised to a 117-103

Cleveland was short-handed again without Timofey Mozgov and Mo Williams, but the Cavs depth continued to carry the team.

The Cavs hit three three-pointers on their first three possessions of the game as Matthew Dellavedova, Kevin Love, and J.R. Smith each knocked one down from the corner.

Cleveland jumped out to a 15-4 lead in the first five minutes of the game and would cruise through most of the quarter until Orlando went on a late-run and Victor Oladipo drove to the hoop for a beautiful layup at the buzzer to make it 29-27 Cavs after one.

Orlando went on a 13-5 run early in the second quarter, propelled by Andrew Nicholson hitting two three-pointers and throwing down a dunk off an offensive rebound.

Nicholson scored 13 of his team-high 18 total points in the quarter.

Orlando led by as many as ten with less than seven minutes to play in the half, but Love came through with three three-pointers in a row to cut it down to a one-point game.

Love scored 15 consecutive points for the Cavs until Smith put the Cavs up 53-52 with under two minutes to play in the half.

Love led all scorers with 27 points at the half, 20 of which came in the second quarter, helping the Cavs enter halftime with a 59-55 lead. His season-high heading into Monday night’s game was 25.

The Cavs picked up where they left off in the third quarter and extended the lead to as many as 21, heading into the fourth quarter up 92-76, thanks in part to J.R. Smith putting up 11 points in the quarter.

Cleveland closed out the game in the fourth maintaining control and earned their third straight victory, winning 117-103.

Dellavedova and Tristan Thompson filled in admirably once again for the injured Williams and Mozgov, as Delly scored 15 points with nine assists and zero turnovers on the night. Thompson hauled in 14 rebounds, making it the 12th time this season he has had eight rebounds or more.

LeBron James played the role of facilitator dishing out 13 assists to go with 15 points and six rebounds. LeBron joined Hall of Famer Oscar Robertson as one of two players in NBA history in the top 25 in points and assists.

After the game, when asked if he pays attention to stats like that LeBron told reporters, “I’ve got enough stats. I’m all about winning now.”

One of the players who benefited from LeBron’s assists was J.R. Smith, who had his best night of the season, putting up a season-high 26 points including six three-pointers, extending his streak of games with at least 15 points to four.

Monday night was arguably Love’s best game since being traded from Minnesota in summer of 2014 as he would finish with 34 points on the night, the most he has scored in a game in a Cavaliers uniform.

The Cavs improve to 11-3 and remain undefeated at home this season winning all eight contests at the Q.

Next up, the Cavs head north of the border to take on the Toronto Raptors Wednesday night.