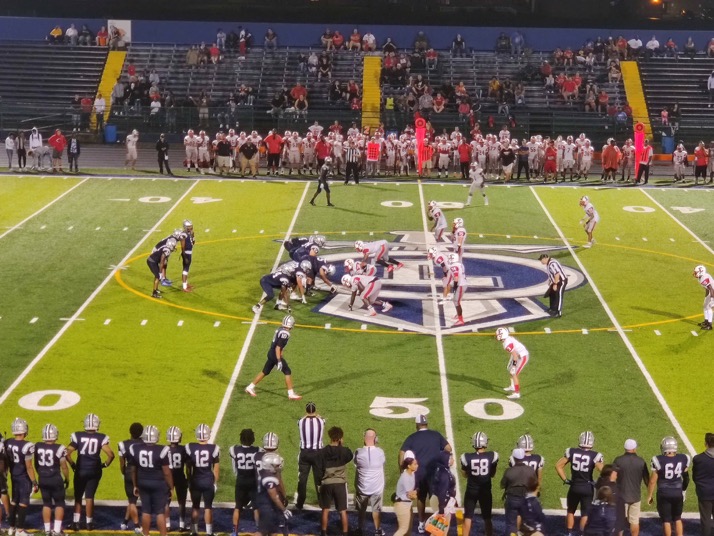 LORAIN, OHIO – The Elyria Pioneers were driving down the field and even converted a first down within the first four plays of the game with great field position from the opening kickoff.

The game was halted after sightings of lighting and the upcoming thunderstorm from the west that came down on the George Daniels Field’s turf.

The storm delay took an hour and a half before the game continued at 8:30 p.m. From that point on, the now 1-2 Lorain Titans defeat the 1-2 Pioneers 25-8 to get their first win of the season.

Both showed off their speed and abilities to get upfield. Chavis rushed 18 times for 137 yards and fumbled once, while Dower scored two touchdowns with 80 yards rushing.

One of Dower’s touchdowns happened on the goal line from three yards out up the middle in the second quarter. The other happened in the fourth quarter with an explosive 55-yard touch run from the outside to make the score 25-0. He showed his versatility as a running back to get the tough yards and make plays in the open field.

“I’m just happy we got our first win,” Dower said after the win. “We still got work to do and go back to the drawing board.”

After they established the run, Titan’s quarterback Jordan Jackson showed off his arm and ability to throw downfield as he threw a 34-yard touchdown pass to De’Vante Jackson to draw first blood 7-0.

A big run from Chavis would put the ball inside the redzone in the third quarter. Soon after Jordan Jackson took a sack, but quickly recovered as he threw his second touchdown pass of the game to De’Vante Jackson from 29 yards to make the score 19-0.

The Pioneer offense struggled the whole game. Daylan Sharlow, quarterback for Elyria, struggled to complete passes with the wet ball. This put pressure on the running back and defense to step up.

Pioneers running back Jaheim Atkinson, who rushed for 100 yards each of the last two games only rushed for 62 yards off 16 carries.

The defense was able to make some key stops, but it eventually broke as the game went on. One of their stops was late in the game where the Titans fumbled the ball in the redzone. Michael Knapp recovered it and almost took it to the house before being tackled around the opposing team’s 20-yard line.

This wasn’t the first time Lorain started a season 0-2 recently. Three years ago, the 2016 Titans dropped their first two games of the season and still made the playoffs. They finished the season 10-3 and lost in the semi-finals.

Seniors on the current Titan’s squad were freshman at the time, but Dave McFarland was still the head coach at the time. He doesn’t know definitively if this team can repeat what happened, but is not ruling it out.

“I don’t know,” he said. “Sometimes it just happens; you get a little bit of luck and that was a magical year. With this team, we just have to fight. We are banged up,” McFarland said.

“We lost our offensive tackle, center, we’ve lost two of our linebackers. We’re banged up. Then tonight we lost T.Y. (Tyshawn Lighty), our dynamic receiver and De’Vante Jackson stepped up. We lost five or six key guys, who are hurt. We just need to keep fighting. That’s all.”